For those new to ciarastar - HI! Nice to see you! I work in a high school theatre scene shop, and 8 years ago we started making a "Quote Wall" of random things people say around the shop. With all of the chaos and volume of a bunch of teenagers with power tools, we never fail to fill it up by the end of the year.

To visually give you an idea of what being on my crew is like, here is what happened when I asked three of my juniors to smile for a photo backstage: 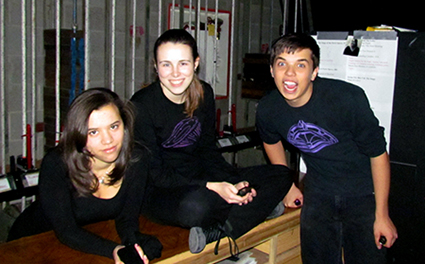 Thanks, Alex, for being cooperative! One out of three kids doing what I ask is actually pretty good for us!

Without further ado, here are our quotes. The theater staffers' names have a star next to them... just in case you can't tell. :)

Alex: "So I was thinking of changing Dylan's music to something embarrassing. When I tried to think of what would be embarrassing on his ipod, all I could come up with was a track of him crying."
-10/3/11

Ciara*: "What are you DOING? Are you trying to kill Mysti?"
Dylan: "Sorry, I forgot that was on wheels."
-10/6/11
(she was standing on a rolling platform full of stair units and he jumped on it. I actually had to make a rule a few years ago about this: "don't stand on things just because they have wheels on them!" wheels are irresistible to teens.)

Danny: "The directors can't cut the abortion or the suicide out of the script - that's like comedy gold! I mean, 'competition' gold!"
-10/21/11
("competition" is our play that that travels and competes... and it's true, the sadder the script, the more the judges like it sometimes - but either way, those things aren't comedy!)

J: "We should totally get full-body black suits for backstage."
Dylan: "That's the stupidest idea I've ever heard."
J: "You work with Rianna and Alex for 3 hours a day - that can't possibly be the stupidest thing you've ever heard!"
-10/29/11
(touche)

Ciara*: "We need to move the chandelier off the stage before acting class tomorrow."
Danny: "Yeah, the actors may kick it... and throw water on it."
-11/2/11
(that is what actors do)

Markus: "Text me when the crewhead list is posted! I've been waiting since Wednesday!"
Ciara*: "I'm not going to text you. This will be a good test of patience for you."
Markus: "But I've already failed! So you may as well text me!"
-11/17/11
(can't beat his logic)

Ciara*: "That needs to be fixed. The platforms aren't aligned."
Dylan: "It's fine! If an audience member can see that, then he is literally an eagle... and I don't care about the opinion of an eagle!"
-1/16/12
(alright!)

Alex: "Do you guys think that all of your years working with children have made you better listeners?"
Ciara*: "No way."
Mysti*: "Made us better what?"
-3/14/12
(you can't make stuff like this up!)

*the crew was putting 2'-by-4' legs on platforms*
Justin: "This is like Thanksgiving at my house!"
-3/20/12
(people were passing around tools like dishes of food!)

Ciara*: "You really should be helping them."
Alex: "I was, but then I started getting really angry at the extension cord, and then I started drinking and it all went downhill from there."
-4/9/12
(that is how it tends to happen. luckily she was referring to being distracted by apple juice)

Susan*: "I do not appreciate co-mingling in other people's water."
-4/10/12
(fair enough - this was in reference to a coupon she got for a hot tub spa)

Ah, kids. You're lucky that things like this make up for the hours and hours of hard work and nagging I have to do! Have great summers!