I think it's about time that I formally introduce you, my diaryland family, to my fiance, Brad. And I am going to do it the only way I know how to: with photos and videos!

Let's start from the beginning, shall we?

My friend Karen and Brad have played in our church band together for a several years and became good friends. He and I had been at a couple of big events (like Karen's birthday party) before, but never met and never really noticed each other.

Then one Sunday in 2010, our church showed two videos that we each starred in.

My video (an intro video to a talk about "first love"):

(that did happen to be my favorite stuffed kitty from my childhood!)

Brad's video (an ad for finding a small group of people you can connect with):

(anyone remember Avatar? :) and extra points if you catch the Tobias Funke reference!)

After the service, we shared our mutual "embarrassment" (although, honestly, we don't embarrass that easily!) with Karen, then started talking about Arrested Development and 30 Rock and an initial connection was made! 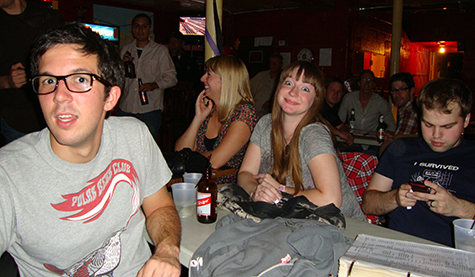 A couple weeks later, I invited Karen and her husband Mike out for a karaoke night in Detroit. They asked if they could "bring some friends". When they picked me up and their only friend was Brad, he and I both secretly realized that we were on a surprise double date! Brad karaoke'd KC & JoJo's "All My Life" and Mike and I joked it was about me (Brad says it wasn't!). 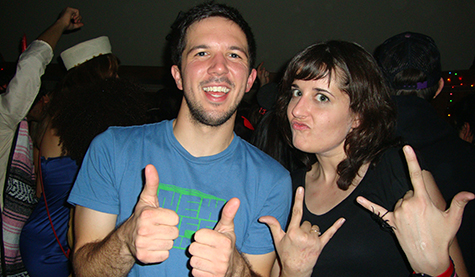 The next month I found myself at a frat party of all places, on Halloween night. I hadn't been to a frat party since maybe early college? But I wanted to check out Brad playing drums in a Ramones cover band and that's where they were playing. As it turned out, I got there too late for the music, but I got to hang out with Brad anyway! 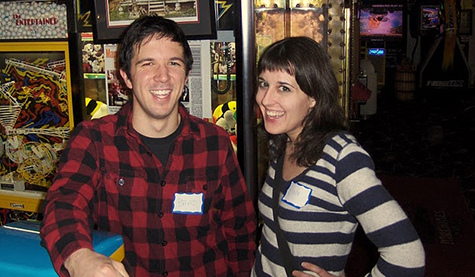 That December, I learned the extent that Brad loved pinball, when I went to his Pinball League's Christmas Party. Yes, pinball leagues are alive and well! And I love playing it for free. :) 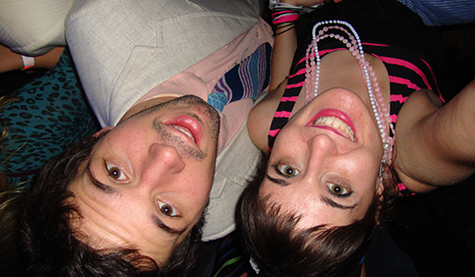 Brad and I rang in the New Year at a hipster dance party called "The Bang!", where the theme was "Blacklight To The Future". It gave Brad the chance to show off his amazing all-white linen suit. I was impressed. 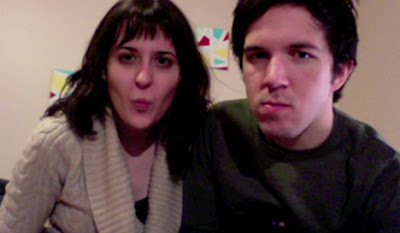 I love this picture. We look like thugs. This is a screenshot of our "audition video" in January 2011 to sing/play at my friend Nancy's wedding that upcoming summer. She was looking for someone who could play acoustic guitar (Brad!) and a girl to sing (maybe me!) at her ceremony. We jumped at the chance, and she and her fiance picked us! Somehow we didn't question whether we'd still be dating in August... 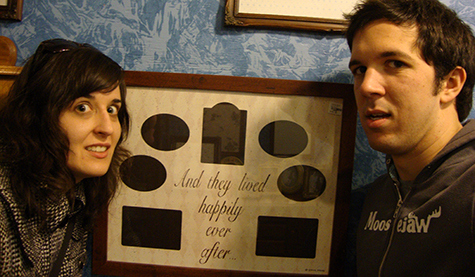 One gray winter's Saturday in March, we journeyed up to Frankenmuth, Michigan, to go to a water park (like normal adults). We stopped at an antiques-store and paused at this picture. Would WE live happily ever after? 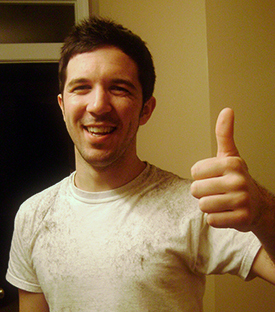 In April, Brad (somewhat out of desperation!) let me cut his hair. I think that's the truest sign of trust from a guy, especially since I had never done it before. I think I did pretty well. :) That guy has a lot of hair (as evidenced by his shirt). 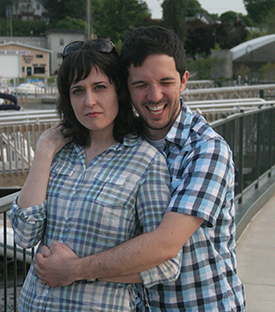 That June we traveled with Karen and Mike to Charlevoix for Brad's birthday. This picture is what happens when you tell Brad, "Let's take a serious picture!" Also, we found that we were accidentally wearing matching outfits more and more... 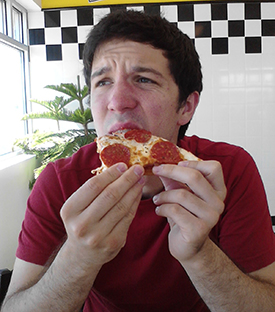 In July, I noticed this for the first time. This pizza is not hot - this is just the face that Brad makes whenever he is biting into a piece of food! The terror in his eyes - and it appears to be entirely out of his control! 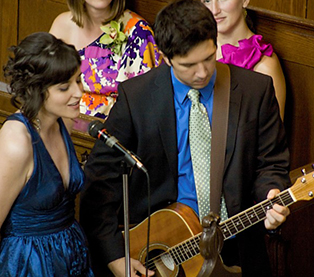 Here we are in August 2011 singing in Nancy and Randy's wedding. We were still together! I could have never done anything like that without him! 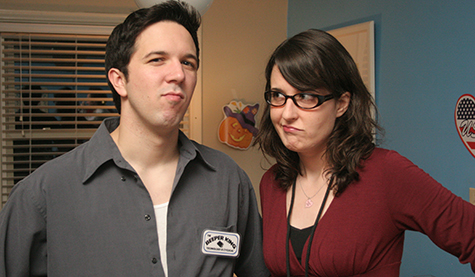 That October for Halloween, we went as Liz Lemon and her ex-boyfriend Dennis (The Beeper King) from 30 Rock, our favorite show! 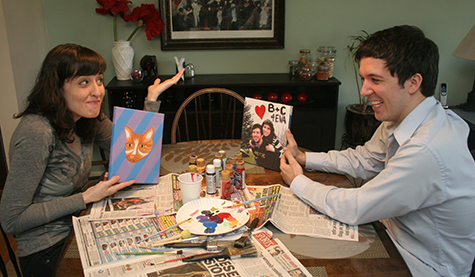 This is an artists' representation of the many evenings we spent making arts and crafts. :) We're currently experimenting with silly soap shapes, but I'll get to that another time! 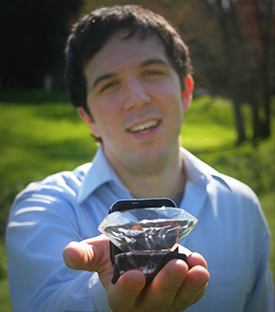 Here is the enormous "diamond" that Brad proposed to me with during a duet at karaoke this February. The diamond was so big, I thought he was joking! When he showed me an actual engagement ring, I realized it was the real deal! I did not hesitate get that locked down!

Now we're happy as clams... well, as happy as happy clams... I am sure some clams are pretty discontent. We are not like the discontent clams!

Thanks for meeting Brad! Hope you all get along, because he's going to be around for a long, long time! :)