Oh, my. What can I say? Seriously, though: what can I say?
And we'll just ignore the fact that they call me "Kiki" at work...

Here we are again, friends! Another school year has passed and my crew kids have yet again filled up the "quote wall" with words on little scraps of paper. This year the shop has been overrun with sophomores, which is great because I'll get to witness their antics for another two years. :)

Speaking of their antics, teenagers bicker a lot. I came up with a clever (if I do say so myself) acronym for what the kids should do when they argue, instead of just continuing to fight indefinitely (which is the default):

W : Walk away from the situation
A : Alert Ciara or Mysti what's going on
R : Return to work

Appropriate, huh? Best part: that acronym came to me in a dream!

Anyway, let's get back to the reason why we're here: quotes! For clarity's sake, I have put a little * next to the name if that person is my co-worker. Surprisingly, it's hard to tell just by the quote! 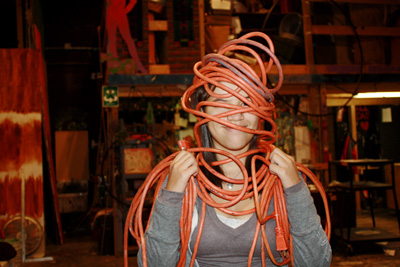 This perfectly summarizes the shop under my watch. :)

Anna: "This figure would be way easier to draw if we had a model in heels. Where's Russell?"
-10/19/10
(Russell happened to be playing a drag role in 'Hairspray'... and he looked great in heels!)

Dylan, singing to himself: "...I want to make believe with you and live in..."
Ciara: "...harmony, harmony..."
Dylan: "You know that song?"
Ciara: "Yes. I, unlike you, was alive when that song came out"
Dylan: "I thought Robot Unicorn Attack made up that song!"
Ciara: "There's a game called �Robot Unicorn Attack'?"
Dylan: "Yes, and I just got the Christmas Edition!"
-12/7/10
(this sums up our generational gap so well!)

Alex: "Colors are for the foolish"
-12/9/10
(Alex reminds me of a young me, always making big claims she has no evidence for)

Ciara: "Everything I am thinking about today is underwater"
Evan: "WHaaat??!"
-12/13/10
(appropriate reaction, I have no idea what I was talking about!)

Ciara: "Do you have a headache?"
Mysti*: "Yes, but I turned it off"
-2/14/11
(I wish I could do that! she turned off the florescent light that was giving her the headache)

Rianna: "I had a disturbing realization in the bathroom..."
-3/25/11
(gross. luckily it was about a fight with Dylan earlier)

Love it. My job may be exhausting at times, but it certainly isn't boring!

Come back next year for more! I am sure they'll be plenty this this bunch. :)