I just can't take a summer off and relax. I think it's a disease. And I think a side effect of the disease is taking extraordinary amounts of time to write about stuff on my blog! Here's a long (but good) story from my summer. :)

After the second burglar cracked open the door at our apartment last October, my roommates and I decided that once our lease was up, we would move out. Since our lease said that we couldn't terminate it early because we felt unsafe (lame!), in order to avoid paying rent at two places, we decided to stick it out until July.

As the months went on, I kept procrastinating looking for a new apartment... and realized I had NO motivation to find yet another place to move to and rent for a few years. Since I moved to this town for college, I have lived in 5 different places and have moved 12 times (counting summer sublets and such). Frankly I was so over it.

Around that time, I kept hearing about this "buyer's market" in Michigan... and housing prices dropping further and further... and I got an idea!!

Despite all of the hints swirling around me, it only took until May for me to officially decide to buy a condo. :) To my delight, just a few weeks after I started looking, I found a huge, cute, super-cheap, fixer-upper in a beautiful complex, so I put in a ridiculously low offer and the sellers accepted!

It all seemed perfect: I have been saving and investing for a few years so I had enough money for a down payment, my friends and old roommates were up for renting from me, and school(/work) ended for the summer so I had plenty of time to pack and move and fix up the new place before our lease ran out.

As with most seemingly perfect things in my life, things got pretty unperfect pretty fast! Here's how it went down:

Monday: I spent $500 for an inspection of the condo, and it passed. I just had one more document to sign and fax (due that Friday) and then I would be officially buying the condo! I technically was already "in contract".

Tuesday: My realtor called me and said she had just discovered that the condo association did not allow roommates unless they were family members. !!! She had never ever heard of that rule before. I contemplated for a long time about what to do, since I certainly didn't want to live there without my friends and they were depending on me anyway.

Wednesday: I spent the entire day on the phone with a realty lawyer, my realtor, and the condo association's secretary seeing if there was a loophole in the documents. We decided on a strategy-- there happened to be a monthly condo board meeting the next day, and I would go there, introduce myself, show that I wasn't going to "bring down their neighborhood", they would vote to override the rule, and we'd all live happily ever after (or for 3-8 years) there.

Thursday: I took some time to make myself look presentable (I even took a shower!) and prepared some bullet points of things I wanted to address at the meeting. I knew the rule was probably in place in order to avoid condos full of crazy students (since this IS a college town), so I made sure to include that I am in my late 20s and my potential roommates and I are all young professionals. I feel like I can be a relatively pleasant person with strangers, but I knew that I'd have to really turn on the charm in case all they saw when I walked in was "keg party waiting to happen".

I walked into the meeting and introduced myself to the other residents, and then patiently listened to them argue for an hour with the board about new sidewalks and lazy gardeners. When it came time for "resident business", I raised my hand and energetically introduced myself, complimented their neighborhood, and started to explain why I was there. Before I could finish, the board's president interrupted me and said that renters weren't allowed and that was final. The conversation from there on out went something like this:

Ciara: "It appears that the wording in the condo documents said that the board could vote about that rule for a special circumstance"
Board: "No, voting is mentioned in the second part of the sentence; and that doesn't apply to the first part of the sentence where the renters are mentioned!"
Ciara: "Well, since the wording appears to be a little vague, do you think we could possibly work something out?"
Board: "No! This is a non-negotiable rule. Owners can not live with renters!"
Ciara: "Could we talk through some other options? What about if my friends just lived with me and didn't pay rent?"
Board: "Oh, come on, we know that you'd just say you weren't charging them rent and then do it under the table"
Ciara: "Not if it means I would have to live alone!"
Board: "Well, if you didn't charge rent, then we all know you wouldn't be able to afford the place anyway!"
Ciara: [with dropped jaw] "I'm sorry, but I have been approved by three different banks for a mortgage on this property. I can afford it!"
Resident: "There can't be a 'no unrelated roommate' policy here-- my husband and I lived in our unit for two years together before we were married"
Board: "Well, then you should have been kicked out!"
Ciara: "Could you please explain to me the rationale behind this policy?"
Board: "Roommates always have lead to bad things"
Ciara: "Could you elaborate?"
Resident: "Yeah, it seems like an antiquated rule- those documents haven't been updated in 30 years. I don't think it always leads to bad things"
Board: "Are you KIDDING me? Have you ever SEEN a frat house?? The rules are there for a reason"
Ciara: "Excuse me, with all due respect, I would NOT run my household like a frat house!"
Board: "Look, you have two options: you can live there with a sister or a cousin, or you can rent the entire place out to a family"
Ciara: "Wouldn't it make more sense to rent if the homeowner lived there, since the homeowner would have more motivation to keep up the property?"
Board: [avoiding my question] "Well, you could just get married, that'd solve it"
Ciara: [in shock, awkwardly laughing] "Well, I wish, but unfortunately that's not entirely up to me..."
Board: "Look, the answer is no, okay? We have other business to talk about. Moving on..."
Ciara: "Thank you for your time"

And I made it to my car before I started crying. I was actually appalled at how rude they were to me. No "thank you for your consideration to purchase a condo in our neighborhood". No "I am sorry this won't work out for you". Just presumption, condescension, and interruption. What was their motivation for being so nasty about it?

Friday: I called my realtor, we talked about it for a while, and I decided to cancel the contract on that condo. Not only would I not want to live there by myself until whenever I get married, but I certainly did not want anything to do with having those people as neighbors! I decided to take the weekend off of condo-ing and try shopping again the next week.

And with that, surprisingly, things started to become perfect again. :)

That next Tuesday, my realtor, one of my roommates, and I toured what is now my new home! It is a little more money than I wanted to pay, but is far, far worth it! It has a pond with a fountain in the backyard, it's in my ideal location, it was move-in ready, it has an attached garage (I have NEVER had one of those in my entire life!), and, most importantly, every neighbor I have met (including the VP of the condo board) has been so warm and friendly and inviting! Oh, and three of my favorite friends get to live here with me! 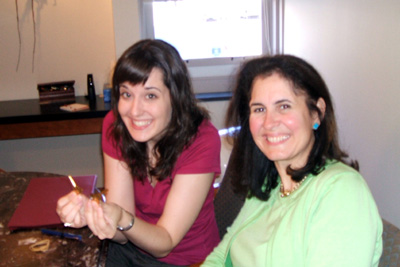 My realtor, Lyla, and I with the keys to my new condo!!

I don't typically think that things "all come together" for Ol' Ciara, but this time they definitely did. I don't think it's an accident that that other condo had a dramatic last-minute fall-through, because the place I ended up getting is such a better fit. It was so so good that I found out the condo board was so narrow-minded before I signed the final papers. I think I can say that God was looking out for me with this, the single-handedly most expensive purchase I will ever make (until the next place...). :) 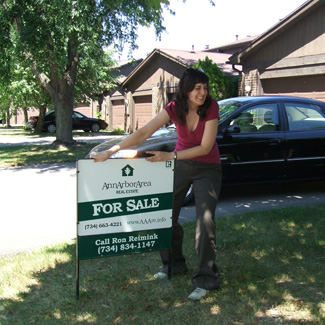 Not "For Sale" anymore!! Weeee!

And now I have a place to call home that I won't have to move out of in two years! And I am a landlord! Life is crazy!