You all know I don't have a problem with making fun of myself, right? I mean, I am more than happy to tease myself (or let others tease me) about the way I look in pictures, like, for example: 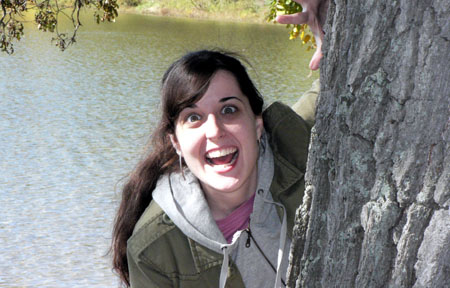 And I truly love sharing the ridiculous things that I say with you so you can (hopefully) laugh at me, like:

But, as one of my students discovered earlier this semester, there is something that I don't enjoy being teased about. And, as a little change of pace on this Christmas Eve, I decided to write about why poking fun at God, Jesus, and Christianity doesn't make me laugh.

Well, there are some things about Christianity you can light-heartedly joke about that are funny to me; like how stereotypical young Christian couples "rush to the altar" and get married at like 19-years-old (I mean, because they do!), how all Christians do on a Friday night is play Gin Rummy and sing songs (it can be fun! plus, it's not always true-- believe it or not, some good Christians go to... *gasp*... bars!), or how Catholics see Protestants as their "pagan babies" that they have to "save" (even though they are all technically "Christian", right?). But where I draw the line is when someone spews crazy lies about God and his character, just for the sake of a laugh or two.

For example, this all started when my aforementioned student said something like this (I am definitely not quoting word-for-word here, but you can get the idea): "Yeah, then in the future, there will be a massive war between ninjas and Jesus, and Jesus will spit fire from his mouth to kill all of the gay people, saying they deserve flames for being flaming, and the ninjas will beat him up, asking 'where's your God now, sucker?'"

I don't know how you guys read this; maybe you think it's funny, or offensive, or you have no opinion of it what-so-ever, or maybe you even think of it as "kids being kids". I personally found it a little offensive, and when I took my student aside and told him that, he replied, "Look, if someone can't joke around with their own religion, then I think there is something wrong with them; they are taking themselves too seriously."

That could be true, but as we all know, I like making fun of myself; I wouldn't say that I take myself too seriously in most respects. The reason that it offends me is not because someone is joking around with me about me, it's because it is making fun of someone who is very important in my life.

With my student, I gave him correlating examples of people who are valuable to him and how he would feel if I teased them in a similar way. What if I found out his mom was Southern and then I said she slept with her cousin or is racist or is an airhead, just so others would laugh at her... or I told everyone that his girlfriend wets the bed or is ugly or is gimpy... or any other number of things that aren't true? Might he take offense, too?

And, I definitely want to point out that there is a difference between making fun of a generic "momma" (like "your momma's so fat, she's got her own zip code") or using a generic "girlfriend" to tease someone (like "dang, your girlfriend must be blind to think you're cute") or something. I am not that easily offended! But when my students, for example, joke that "Jesus hates gays", they aren't talking about a generic "Jesus"... they are saying it because they think it's true and want to point it out and laugh at how "ridiculous" he is (trust me, I've heard enough of their conversations to know that's how they feel).

Maybe God is easy to make fun of because to some he is like an imaginary creature, like a unicorn or a Smurf. Maybe it's because he's so misunderstood. Maybe it's because people try to cover up the fact that they feel hurt by him in some way. Maybe it's because he can't audibly (or physically) stick up for himself. But, like him or not, God is an incredibly significant being in my life... and not because someone told me to believe in him or because I am brainwashed or anything like that. I believe because I've experienced Him. I chose Him. He has saved my life (literally). My whole world view is based on the fact that He exists and is a part of my life. And just like I would be with my mom, brothers, friends, or my boyfriend, I don't want to be a part of people lying about him or putting him down.

I hope that this entry doesn't make you look at me any differently... I am still the same Ciara who will be teasing herself in future entries! I am not trying to preach to you (you know I am not one to shove my religious beliefs down peoples' throats-- I bet some of you didn't even know I was a Christian until today!), I just wanted to share something about myself. I figured that since it's Christmas and all, it's time for my page to focus on the "reason for the season", so they say. :)

Anyways, Merry Christmas everyone! And, if you're not a Christmas-type, I hope that you have a warm and happy holiday season!