Hey friends! As you may know, I've been loving the twitter, but sometimes I want to tweet about something that's just too long for their 140-character limit. Luckily for me, there is Ciarastar: The Blog for situations like that. :)

Here are some of the things I would have tweeted recently, if I could have:

1. My roommate Karen & I are getting to be almost creepily in sync! The other day, I went to the drug store to buy dishwasher detergent. Later that day, I made muffins (which never happens) and used the remainder of the vegetable oil, so I wrote it on my shopping list. Apparently my roommate decided to stop by the store on her way home from work too. What was included in her purchases? 1. A new bottle of vegetable oil (how did she know?) AND 2. The exact same size, brand, and scent of dishwashing detergent I got!
(515 characters)

2. I had the pleasure of babysitting my baby human nephew Danny (while parents Dante & Olga were at work) and my feline nephew Ralphie (while dad Davidde was in Sweden) in the same week. They are oddly similar: both like to be pet on the head, both whine when I pay attention to anything except them, both like to nap, both are super cute, & both play with brightly-colored toys with bells in them. One distinguishing difference, however: Danny will tolerate my singing, while Ralphie simply despises it!
(501 characters plus links to pictures) 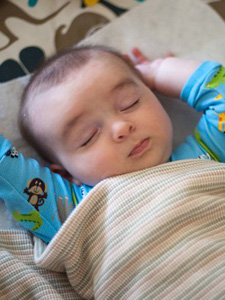 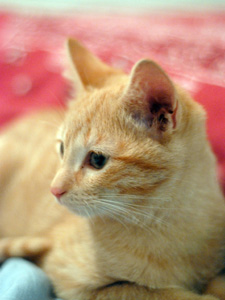 3. When I checked my voicemail, I had an automated message from Kroger saying, "You have recently purchased a recalled food item. It is very important that you get a pencil & paper to write down this product so you can return it and not consume it-" Then the message cut out! I didn't see any recall info on their website, so I didn't worry about it. The next time I went to Kroger, the recall info was on my new receipt - for the 2 cans of Spaghetti-Os w/Meatballs I had definitely already ate!
(492 characters)

4. Dante's remote control is nuts. It works almost entirely by asking you questions and automatically turning on & off the appropriate devices. It sounds simple, but in reality it's one of the most complicated things I have ever operated. When I told my friend Meighan about it on the phone, she said, "I saw it on Dante's facebook page last month, purchased it, then returned it because it was so annoying!" Facebook = the only way my out-of-state friend would use my brother's remote before I did!
(496 characters plus link to the remote)

5. I was at a dinner party recently with about 25 people, mostly strangers. At one point, someone near me told a story about Aretha Franklin wanting a Coney Dog in NYC. I asked why Aretha would ever want a NYC Coney Dog, since Coneys were popularized in her hometown of Detroit. I then threw in a fun fact that some East Coasters used to call Coney Dogs "Michigans". NO one believed me at first, but ironically, in our party was a Coney Dog Expert (officially! he has published studies on them!) who confirmed my fact! What are the chances?
(536 characters)

6. Re: his baby nephew: "We all stand around for hours, happily staring at the baby & clutching our chests. How strange to feel yourself falling in love with someone you've only just met... 'I love him so much it hurts,' my sister says, her hand on her mouth. 'Me too,' my father says, 'It actually physically hurts.' 'It's like someone is beating me with sandbags,' my mother says. 'With me, it's more of a stabbing,' my father counters... I look over at the baby & he smiles a little smile at me that fills my heart with so much love, it's as though I've had my eyes sprayed with acid & my heart stabbed with a salad fork." [email protected]j_goldstein #wiretap
(645 characters plus link to radio show wiretap)

Were these stories simply too long for you? Try out my Twitter instead! :)