I've been posting a lot of words lately, so how about I give you a little break and post some pictures instead? :)

Earlier this year, I caught an episode of the new FX cartoon "Archer" and had to do a double take. One of the characters (a "bad guy" actually) looked eerily similar to a cartoon representation of my brother Dante (with a mustache)!

It seriously distracted me the entire episode, and I haven't watched another one since!

You can judge for yourself: 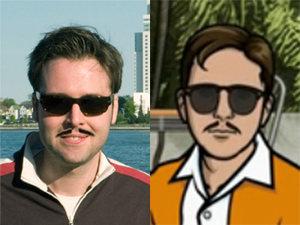 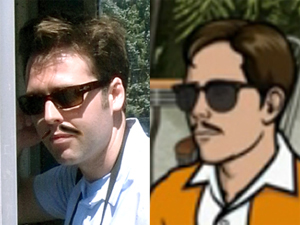 (per Dante's request, I added the cartoon mustache!)

A little creepy, no? I mean, the hairline alone...!

By the way, this character didn't act or sound anything like Dante, it's just his look. If you watch the episode, mute it to see "cartoon Dante" in action!

(hope this wasn't too bizarre of an entry for me to post on your birthday, Dante! have a happy one!)