So how is everyone? Doing ok? As my personal trainer Gilad (via his 1990 "Bodies In Motion" workout video) says, "Let's take inventory!"

So far all of my ten 2010 predictions have come true. A few of the things that I listed I already blogged about (Footloose, twitter, Miami, and my awesome nephew), but these things also happened:

- I got and sent in my Census form! I exist to the government!

- My BFF Katrina, her husband, and their son moved to Michigan!!! It's going to change my life. Surprisingly, my college friends Derek and Mike (with his wife and daughter) ALSO moved here!

- There is no more smoking allowed indoors in Michigan (with a few exceptions). Karaoke will never be the same! And I never have to wash my hair again. Ever. ;)

- My basement is "finished" now. I use quotes because I still haven't added the murals (I have a vision), but the construction (and massive dust!) is over!

- I am no longer in my 20s. I don't feel very different, but I am hoping things will be different and my 30s will rock.

Unfortunately, however, 2010 has also brought its challenges. I won't go into detail, but I have been pretty stressed over the past five months. There was one day in particular that was so stressful in fact that I needed a distraction of monumental proportions just to get through it. And (thank God) I just happened to have one.

One of the coolest surprises of my 2010 so far was� getting to see Conan O�Brien perform LIVE!

For those who don't know the Conan backstory, here's a rundown. Conan had been a wildly successful comedy writer (on "The Simpsons" and "SNL", to name a few) for 10 years before NBC gave him his own Late Show in 1993. Last year, he took over The Tonight Show from Jay Leno (as promised in 2005), while Leno moved to a primetime talk show.

After a quick 7 months, however, NBC decided to return Leno to The Tonight Show. Conan was given a choice to move his show to 12:05am, which would bump his Late Night successor Jimmy Fallon later, too. But Conan chose instead to respect the long Tonight Show tradition and his pal Jimmy and turned down the offer.

The result: Conan lost both of his shows, despite his 17 seasons (and 1700+ episodes) as a popular nighttime talk show host. He left with an incredible amount of dignity and humility, despite being screwed over.

As Conan waited to see if anyone would want to hire him (TBS thankfully picked him up for this fall), he struggled with what to do next. He and his team (band, regulars, writers, etc) decided to tour the country with a stage show. Conan didn't have any real live stand-up experience (contrary to popular belief) and NBC owned the rights to most of his shows� running gags, so he and his team had to be creative in order to entertain arena-sized audiences for hours at a time. The name of his tour: "Legally Prohibited from Being Funny on Television Tour".

Okay, so that's the news version, and here's my experience. For at least the past 8 years, I�ve worked in the afternoons and nights, so my sleep schedule is pretty unusual. As a result, I got into the habit of watching Conan's Late Show after everyone else went to sleep. Many things and people have come and gone throughout my last decade, but Conan was always a constant. No matter how long the weekday was, I knew I'd end it laughing with him.

Then one day in January: poof! It was over. Gone. And it seemed to have disappeared for such unfair reasons. I don't handle injustice very well... or good things leaving my life, for that matter. My late nights instantly felt lonelier.

Despite Michigan not originally being on the tour, a Michigan State University group begged and pleaded and subsidized and surprised us all with a Conan show last month! I didn't know what to expect, but the show turned out to be so FUN!

Sometimes that's all you need: pure, unadulterated fun. And Conan brought it. Hard.

1. All of the gang was there: Andy Richter, LaBamba, the band, Triumph, etc! 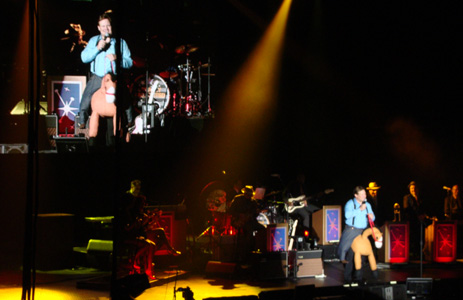 Andy Richter riding a pony, reminiscing about "What [He's] Learned".

2. He slightly altered his regular bits to get around NBC's copyrights, so they were there, too! For example, instead of the "Walker, Texas Ranger" Lever (which he'd pull whenever his show needed a Chuck Norris insight), he brought out the "Chuck Norris, Rural Policeman Handle"! 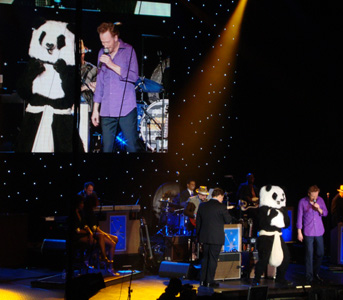 I'll let the hardcore Conan regulars figure out who this diapered panda used to be!

3. He made it personal! He and the other writers must do tons of research before every show - he brought up all sorts of East Lansing inside jokes (I never lived there so I didn't "get" most of them, but I appreciated the effort!). It must be a different show every night, much like Conan was probably used to. :) 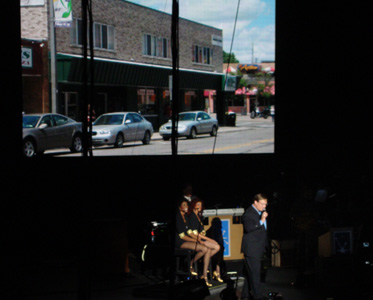 4. He brought out special local guests: Kid Rock; Sarah Killen, the one person he randomly decided to follow on Twitter; and an MSU-grad-turned-comedian, Reggie Watts. 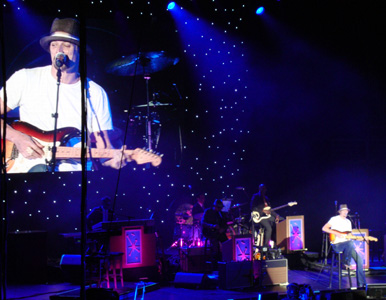 You can't see clearly in this picture, but Kid Rock was wearing this amazing bling-ilicious ring with the Detroit Tigers' "D" on it. I was enraptured by it!

5. They kept it interesting! We never knew what would happen next. At one point Conan displayed a huge bat balloon he bought from Meatloaf; at another he ran out into the crowd to give high-fives. He sang, told jokes, bantered. There were videos, ridiculous costume-changes, and original songs. He is a very talented performer and really knows how to own an audience! 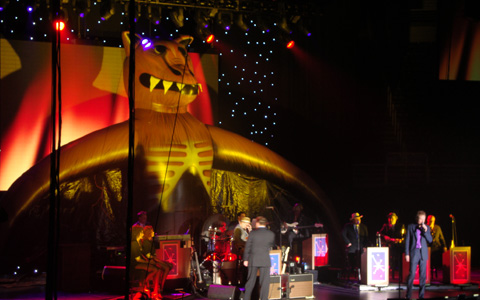 The bat wasn't nearly as scary and/or intimidating as Meatloaf probably hoped it would be!

All that to say: It was so so entertaining. I even have fun thinking about it!

Thanks to Matt and Kim for helping me score excellent tickets! Oh, and I didn't even mention one of the best parts - I got to see the show with Davidde! Not only did I cherish the chance to hang out with my brother, but he's got the best laugh, which came in handy. ;)

Just for funsies, here's a small slice of his opening monologue, which explains some of the stuff I touched on earlier (and you can hear Davidde's awesome laugh in the background!).

Thanks, Coco, for being here when I needed you! I can't wait until your new show starts!