So, where have I been, you might ask? Well, surprisingly enough, I got back after a nice 2-week vacation (well, the first week was nice... the second week was a little full of sicky...) to one of my busiest weeks! Go figure. :) I am in a play in mid-February, plus the high school kids have an American Idol-type singing competition that I have been tech directing... so the long and short of it is, between working and rehearsing, I've been back for 13 days and haven't really had any free time! I haven't even had time to unpack (sorry, Demoree!)!

But it's been good. I have missed being busy, and this (for the most part!) is fun busy! I don't think I could go on like this forever, but I imagine that I'll survive through the last (of the 5) singing competition shows this Saturday.

In the meantime, of course there are random stories and sillynesses that occurred with the combination of a lack of sleep, spending long hours with high schoolers, and doing community theater. But one thing I noticed in particular is that, when I am tired, one of my instincts is to use more metaphors (since they do the explaining for me), but one of my weaknesses is that they don't come out right (since I am too tired to remember them!). Do we all remember Biff from "Back To The Future"? I might be his real-life equivalent! Except instead of just plain getting them wrong (i.e. "make like a tree, and get out of here"), I actually seem to combine two! Here are some recent ones and what they were supposed to be: 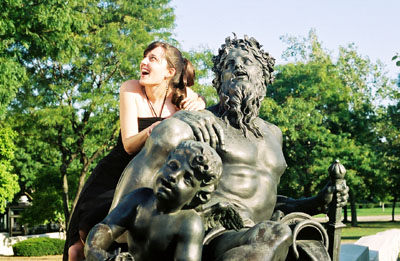 I don't know what a picture of a metaphor would look like- and since I know that most of you won't read this without a picture, I am just posting this one of me hanging out with my sea-creature friends last summer. :)

"The kids were crazy at Friday's performance. So many of them tried to get in without paying for tickets, but we wouldn't let them. We really held onto our guns!"
-1-14-05
(holding guns would have probably helped, actually!)
"hold your horses" &
"stuck to your guns"

But, of course, this isn't the first time I've been tired and distracted, so here are a few gemstones from my past:

"Unlike lots of the kids when you went to school here, the students these days are fairly well-behaved. This place is like a tightly-oiled engine now!"
-11-4-04
(who even knows where the "engine" part came from? another metaphor?)
"tightly run ship" &
"well-oiled machine"

Metaphors are all really kind of ridiculous anyways, so it's okay, right? :) At least one of the advantages of a lack of sleep is the amusing quotes that come out of it!

Since it's been like 2 weeks since I've updated, I'll leave you with just one more little snidbit from my life this week:

On Tuesday evening, I was at rehearsal for the community theater play, and I was talking to one of my students, Betsy, who also happens to be in the play. I was eating key lime pie yogurt and at one point, I said to her, "I�m nervous that I am going to spill yogurt on myself and not notice. Will you let me know if I do that?" She agreed, and then we were all called on stage by the director. The first woman I saw on stage said to me, "You have something on your shirt" and I looked down to see, lo and behold, lime green yogurt! Without responding, I just LICKED it, and it took me a second to realize that this woman didn't know that I knew what it was! So I explained that it was yogurt I was just eating and gave Betsy a dirty look! She claimed sincerely that she didn't notice! But, it was a black shirt and lime green yogurt! Please!

Now, I wouldn't be so sensitive to this if it weren't for a party over Thanksgiving break. My friend Elif had a birthday party for her husband and after a few hours there, socializing and meeting new people, I walked by a mirror in her dining room and noticed a glob of frosting WITH COLORED SPRINKLES right on the front of my shirt under the neckline! I grabbed a napkin and frantically tried to think of the last time I ate frosting, and it had been at least an hour earlier, maybe two, and no one told me!! And both of my brothers were there!! Sprinkles!!

I actually told these two stories to a couple of my students yesterday when we were figuring out the lighting for Betsy's number (she's also in the singing competition), and one kid, Steffie, while laughing at the frosting story, said,

"That's great! And it reminds me- I don't have a ride home tonight!"

?? Now, how exactly does food on clothing remind her of rides home? Do I want to know? :) Apparently I am not the only one who's been a little out of it because of the busyness!

Anyways, thanks for tuning in even though there hasn�t been anything new for a while. I hope that I wasn�t too frustrating and pushed you to the end of your envelopes or anything� I have been running on empty and, as a result, I think losing my mind� but I am trying to think outside of the plate. Okay, that�s enough. :)