There is a website, brainyhistory.com, where you can search for a specific day of the year and find out all of the notable and possibly world-changing things that happened on that day throughout recorded history.

Below, I've compiled a sample of the most interesting and relevant events that happened today, February 17th, in the United States from brainyhistory's exhaustive list.

On this day in history:

1911: 1st hydroplane flight to and from a ship in Glenn Curtiss, San Diego

I don't mean to downplay history or whatever, but after reading through the February 17th timeline, I am inclined to say that our news is one of the happiest -- if not THE happiest -- things to happen on this date. Of course, I may be biased. Maybe some of you are just as giddy about prohibition ending or the minimum wage law as I am about the engagement? But that's ok! Isn't the fun of history that it's completely subjective? :)

I know it'll be hard to remember our engagement anniversary in the years to come with all of this holiday competition, but I guess we'll have to manage. 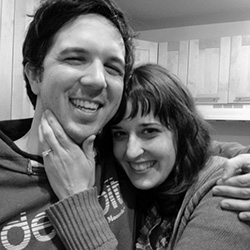 DUDE, I am getting married! Thanks to Brad for forever making February 17th memorable!