Will my creativity ever run out??

(that's not rhetorical; I am actually getting quite worried about it)

For the past *ahem, cough, cough* years, I have been entrusted by my students to write their bios for the play program. What started as a couple of students with writers' block and my boredom has snowballed into quite the obligation - er, privilege. :)

Despite doing five shows per season, we only include bios in one program; our one-act Competition show. This show travels -- scenery, lights, props, and all -- and competes in play competitions around the state. This year, we did the play version of Spring Awakening. 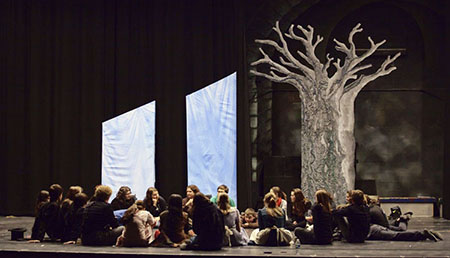 Since these short blurbs are pretty much the closest thing to "creative writing" that I do, I am sharing them with you here. As with last year, I outsourced some and have included those as well. I hope they will give you a glimpse into the amazing lives of my dear students (although they are complete fiction)!

Alex, a junior, is excited to be the only member of Sound Crew for her second year on Competition. Outside of theatre, Alex's interests include ham (vegan and regular), Cheesy Blasters, Oprah, dressing like Princess Leia to get out of jury duty, Night Spanx, "lizzing" (laughing so hard she... you know), and talking about (but never actually) adopting a child. She's proud of the fact that no man has ever seen her feet. When asked about the State Competition, she emphatically responds, "I want to go to there!"

Amelia, a junior, is working as assistant Paint Crewhead for her first year on Competition. She's an avid gardener, so she's interested in our choice of play, Spring Awakening. "It's about horticulture, right?" Amelia says. When the weather outside does not allow her to grow plants, Amelia loves tending to her rock garden. She's named all of the rocks and makes sure to talk to them everyday to help them grow. Fun fact: Amelia earned the World Record for bee stings sustained by a surviving human subject (2,444), the oddest being inside of her gall bladder.

Becca, a junior, is happy to be assistant stage-managing her first Competition show. Becca loves science, and she come from a long line of inventors. Her grandmother and father both have several products available in the As Seen On TV section of local Bed, Bath, & Beyond stores, like the Flowbee, Snuggie for Dogs, and AromaTrim Weight Loss perfume. Despite her young age, Becca already has several patent-pending gadgets, like the "Cereal Sipper" combination blender and travel mug for people who eat breakfast on the go, and the "Digital Name Tag" for people who change jobs a lot. She can wait to see what other great ideas will pop into her head!

Dylan is a junior returning for his third year on Competition Sets Crew. He likes designing because it gives him a chance to really dig into the play's plot, "I totally read the script," Dylan said, shaking his head "no". Thinking of his teenage years, he concluded that he was born 1-2 decades too late. He'd gladly endure the long greasy hair and jean overall shorts for the balanced budget and tax cuts for the lower class of the 1990s. Plus, "the ability to watch 'Friends' when it originally aired, while sitting in a pile of Beanie Babies" would have been "amazing".

Kaitlin, a senior, is thrilled to be designing lights for her first Competition play. Her favorite light is a Vivid-R; her favorite part of the Vivid-R is it's 1-to-43-degree-C ambient operating temperature (of course). Kaitlin's favorite color is rainbow. If she could run the universe, she would make the sun more versatile by having it be able to switch colors by remote. "I mean, I like the sun and everything, but sometimes I am in the mood for some cooler looks from it," Kaitlin says, wearing sunglasses, indoors.

Kate, a junior, is the Stage Manager for Competition for the third time this year. Though Kate loves calling cues backstage, her real dream is to be on stage, particularly as the winner of "America's Got Talent". She's auditioned for all six seasons so far. Her past talents include crossing her eyes for up to four minutes; walking on her tip-toes while carrying 2 full glasses of water; reading a book upside-down; reciting pi to 14 decimal places; and singing "The Star-Spangled Banner" in Spanish. Now she's working on her most ambitious talent yet: teaching poodles how to fly. Wish her luck!

Laurie is a sophomore playing the part of Thea and designing makeup for her second year on Competition. Last October, when the qats were changing colors, she went to a cwm and sat among the sequoias to tap into her xi. A nearby aboideau made a phfft as she sat on a jacquard, drinking joe and eating a qadi-blessed snack from her faux pyx. At one point, she saw a queue of eaglets jumping from their aerie and a thought struck her like an acuate couteau. She let out a cooees, "Tsk! how could it have been so opaque? I should be doing something more quixotic!" With that, she bid adieu to finding syzygy and now spends all her time playing Words With Friends.

Sara, a junior, loves being Paint Designer and Crewhead for her second year on Competition. Sara, who used to adore the color red, has now claimed "wood grain" as her favorite color, although "stone" comes in at a close second. "Black" and "painted wallpaper" are also in her top 5 favorites. She can't say for sure if the dozens and dozens of platforms and flats she's painted have influenced her likes, though. As a hobby, Sara likes to trash talk living trees, telling them she can paint bark more 3-dimensionally than theirs. She also likes painting animals. "Why not paint cats?'" Sara says.

Zoe is a junior Co-Crewhead for Lights Crew on her first year of Competition. Despite all of the stresses that come with working on a crew, Zoe finds theater to be quite relaxing. Her favorite activity is cloud-watching under our sky drop. She loves it when we rent new ones because it gives her the opportunity to find more cloud-shaped dragons, bunnies, and such. "I wish there was a way to see different cloud configurations every day!" says Zoe. (Between school and theatre, Zoe has never actually seen the outdoor sky during the day.)

Aaliyah is a sophomore playing the part of Ilse, doing Competition for the first time. Last summer, Aaliyah spent all of her free time trying to crack the McDonald's Monopoly code. Using a series of graphs, maps, and complex equations, she charted the locations and food items containing the most sought-after pieces. She never used her knowledge for her own benefit; she would always make sure only needy families won the big prizes. When McDonald's executives caught wind of her scheme, they reached a settlement with her: she agreed to stop, and they gave her "Free Parking" for life.

Danny is a sophomore on his second year of Competition, and this is his acting debut as Otto. Danny was on lights crew last year. Danny's peers were blown away by his lights skills last year. "Danny has more lighting knowledge than the World Book Encyclopedia," said one of his superiors. Little did they know, Danny was only acting as though he knew everything about lights. "It was the best piece of performance art I've ever done," Danny brags. In awestruck sorrow, Danny's crew said farewell as they watched him soar into the blue skies of acting, where they knew he belonged all along.

Justin is a freshman on General Crew for his first Competition play. Justin got his start as a crew member for various Disney Channel original movies. He played a key role in the enduring classic "Brink" and lead the crew for "Alley Cat Strike", for which he is also credited for naming. After a bitter contract dispute for the big-screen "The Lizzy McGuire Movie", he stepped out of the backstage "spot light" (the "shop light" per se) to enter a hermit-type retirement. Now, 9 years later, the old pro rejoins the techie world at the high school.