So you may know that I love the city of Detroit. I know, it's not a very popular opinion, but, for me, it's where my heart is. And one day, I hope it'll be my home again, too!

Last year, my brothers were involved in a recently rebirth-ed Detroit tradition and so I decided to check it out this year. IT WAS SO GREAT!!

La Marche du Nain Rouge started because of an age-old Detroit folk tale. The "Nain Rouge" is a "red dwarf" who apparently has been seen by eye-witnesses at all of Detroit's greatest disasters. The Marche (parade) was started in 1710 as a symbolic way for Detroit citizens and fans to destroy the dwarf with hope and city pride, as if to say, "Detroit will survive!"

It's full of inside jokes, amazing people-watching, and good cheer. I left feeling optimistic and excited, and more convinced than ever that lots of Detroiters are super fun.

Let me walk you through it:

The event started by the Nain interrupting a speech by the founder of Detroit, Antoine Laumet de la Mothe Cadillac (the first to be haunted by the Nain, over 300 years ago). 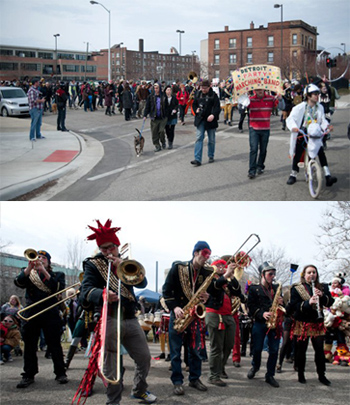 Then the Nain "led" us from Midtown to a park downtown, complete with a New-Orleans-style jazz band, to show off his power. Little did he know we were actually marching there to trap him! 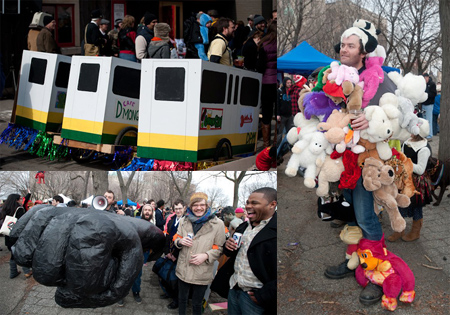 Everyone dressed up in costumes to hide their true identities from the Nain. My favorites were the people who went as Detroit monuments. (pictured: The People Mover, The Joe Louis Fist Sculpture, and the Heidelberg Project) 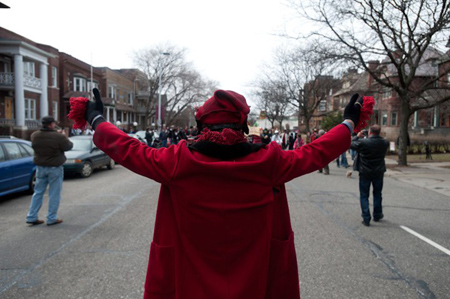 As we walked, the Nain would heckle us, shouting things like,
"I love making pot-holes in all of your streets!"
"I implode all of your historic buildings!"
and
"I moved the Pistons to the suburbs!"
to get us all riled up!

Once we got to the park, the Nain got up on stage to discourage us. But we shouted out how much we love Detroit and it weakened him enough for The Spirit of Detroit (statue), Mayor Coleman Young (1974-1993), and Cadillac to overcome him and send him out of the city (in a Cadillac car, appropriately!). 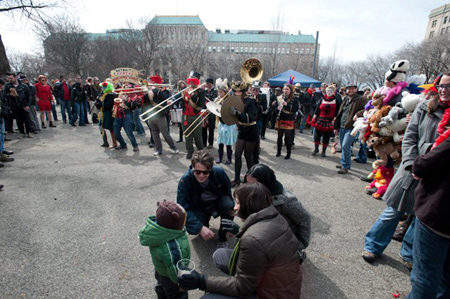 Afterwards, people hung out at the park and ate and partied and listened to the marching band and danced (at 2pm on a Sunday). Love it.

The history of this event and the Nain is pretty fascinating. If you're interested in learning more, check it out here. And plan on coming next Spring!

(thanks to Dante for the pictures!)