You may notice that I tend to disappear every winter. Basically, work takes over my life from December through February. I think there was a stretch when we had 11 different shows in 6 weekends. Plus, the combination of extended periods of time overworking with teenagers and the cold dark weather led to me sleeping during any minutes of free time I had!

It feels good to emerge from the cocoon!

One of the shows we just completed was our one-act traveling competition show. Among other unique things about the competition show, it's our only show that has student bios in the program. A few years ago, the kids started giving me the opportunity to make up fake bios for them. It's been a fun way for me to take a break from carpentry... and my crew... :)

Per tradition, I am going to share with you the bios I wrote. This year I was particularly busy doing work at work (go figure) so I ended up doing something unusual: I outsourced some! I've included them as well. Hope you enjoy! 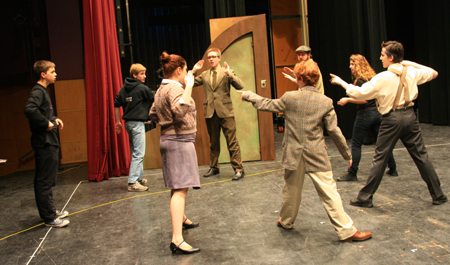 Some of the kids who trusted me to tell the story of their lives, warming up before a performance.

Alexandra: Alex is a 10th-grade member of the General Crew, focusing on sets and sound effects. Besides theater, Alex is a well-known dog trainer. She owns about a dozen canines, and one, Paws McRuff, has appeared in almost 50 television shows (like "Dog Parks and Recreation") and mini-series (like "A Tail of Two Cities"). Check out her newest pup, Scrappy Kibblestein, compete on the game show "Minute to Spay It" this spring! She is excited that Competition will give her a reason to train homosapiens for a change!

Jessie: Jessie is a junior on General Crew, focusing on paint. She recently discovered that she's the princess of Genovia. She's been working hard with her grandmother, the reigning Queen, to shed her preteen awkwardness to become the lovely teenager she is now. She also has a part-time job working for a company that implants ideas into people's dreams. Despite her hectic schedule this year, she did have time to juggle two boyfriends, Edward and Jacob.

Lottie: Lottie is a 12th grader and the Props Crewhead. She considers herself a very driven person and has many life goals she would like to accomplish. For example, she would like to compete in a decathlon, climb the Seven Summits, and be the first Federal Judge in space. She also wants to train cats to speak in sign language, reinvent the wheel, and win the world hot dog eating competition, all by the time she is 30. After that, she figures she'll get started on her big goals.

Rennie: Rennie is a sophomore acting in her second Competition show. In her spare time, she enjoys performing in deep-sea synchronized equestrian competitions with her prize pony Sir Prance-A-Lot. Rennie and Sir Prance-A-Lot can hold their breaths for a collective record-setting 14 minutes. She's only had to give him mouth-to-mouth resuscitation once in 8 years! She can't wait for Sir Prance-A-Lot to see the show -- he loves comedies.

Zach: Zach is a 12th grader acting in Competition for the first time. What most people don't realize about Zach is that he is the grandson of Denny of "Moons Over My Hammy" and "Better Burgers" fame. Zach was actually born in the walk-in freezer of their Memphis Denny's restaurant. He learned how to flip silver dollar pancakes in 0:7 seconds flat. The only problem with him being a member of the Denny family is that his eyes no longer produce saline tears -- he cries bacon grease. 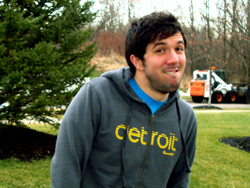 April: April is a 12th grader serving as Paint Crewhead for Competition this year. It's well-known that her soul is the color of periwinkle. Her dream is to someday open a sandwich truck named "Periwinkle Soul", which will specialize in American Food with Canadian names. Her proudest accomplishment so far was her longest yawn, at 2 minutes and 10 seconds. She would also like you to know that she does not believe in hiccups ("Never have, never will").

Danny: Danny is a freshman on General Crew, focusing on sets and lights. Danny began his career as a carpenter when he was given his assignment at the Ceremony of Twelve. One of his greatest carpentry feats was constructing a small model of his boyhood home, and building a doorstop, which is now inside that home. Danny said the best advice he ever received was from his 8th grade English teacher, who always said, "Never eat spinach with strangers." When asked if he had ever eaten spinach with a stranger, Danny declined to comment, and wiped a lone tear from his eye.

Jordan: Jordan is a sophomore actor performing in Competition for the first time. Jordan plans to spend his summer traveling, as his uncle recently gave him a ring that apparently must be dropped off at an ominously named mountain sometime soon. Jordan's favorite book is Lord of the Flies, a do-it-yourself guide to raising your own loyal flock of flies. Jordan failed to bring his "fellowship" of flies along with him on his trip to the mountain; he knows he can only complete the journey alone. 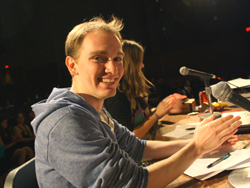 Carly: Carly is a senior who is new to Competition as the Assistant Producer. She's the daughter of Patrick Dempsey, the famous actor. It's a wonder that she has grown up so humbly considering her beauty, wit, and charm. Because her dad is so famous, Carly spends her time dodging paparazzi, jet-setting, and hanging out with her dad's famous friends like Amy Adams. I mean, did you SEE Enchanted? Way to go, Carly's dad.

Grace: Grace is a 10th grader on General Crew, focusing on props. Outside of high school and theater, she's a talented ballerina who has had great professional success in the Armenian Ballet Company. However, after a tragic tutu accident, Grace retired and pursued her original passion for stage props. She specializes in bowties and fanciful hats. Besides her lingering tutu-related Post Traumatic Stress Disorder, she continues to lead a normal life.

Sara: Sara is a sophomore serving as the Assistant Stage Manager. She is also a killer robot sent from the future to prevent the rise of the codfish overlords. When she is not destroying Koi fisheries across the United States, she enjoys origami, knitting, and Zumba.

As you can see, I have some extraordinary students. :)

Hope to see you all again real soon!