My friend Ryan and I have some of the most creative conversations over instant messenger. For example, once I typed, "hm..." to imply I was thinking, and we just dropped our original conversation to guess what else the letters "H-M" could stand for (like "Her Majesty", "hot mama", and "holy mackerel"). Another time, we randomly added "Mc" in front of the majority of our nouns ala Generation X, yet continued to have a serious conversation. Or I should say, a serious McConversation!

Such is our dynamic. And yet these tangents always come as a nice surprise. :)

A couple of weeks ago, we started with the following conversation:

me: should I know who kim jong-il is?
Ryan: haha
http://en.wikipedia.org/wiki/Kim_jong_il
he may or may not be actually alive right now
me: no one knows? or you don't know?
Ryan: he's a living puppet or he could have died 10 years ago and been replaced by a look-a-like
there's a student in my building who looks pretty similar to him
and i'm quite suspicious
me: haha
weird! it sounds so soap opera-ish!
Ryan: i know
it's like "Weekend at Bernie's" meets "Apocalypse Now"

And that's all it took for us to start going back and forth trying to compare the North Korean dictator's situations to ridiculous movie combinations! We threw out a bunch, but here are some highlights (I have since expanded these ideas into actual possible stories for you all!):

Ryan's Combo #1: "Pretty Woman" meets "Attack of the Killer Tomatoes"
Plot:
It's the age-old American love story. A successful businessman hires a prostitute to be his escort for a week of hob-nobbing with Manhattan's elite. Their fairy-tale week ends in bloodshed, however, after several people get eaten by vegetables at a polo match. As expected, the prostitute is forced to become a master of disguise, dressing as a black Martha Washington in order to investigate. She saves him from killer veggies; he saves her from a life working the street. And so begins their life of happiness together.
Tagline:
"She walked off the street, into his life, and stole his heart. Can somebody please pass the ketchup?" 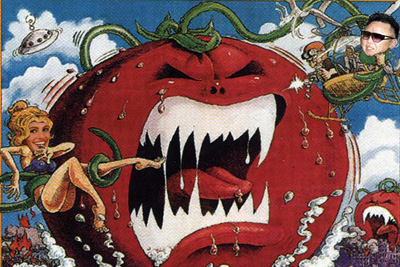 Ciara's Combo #1: "You've Got Mail" meets "The Birds"
Plot:
Girl meets boy in her small San Francisco pet shop. Girl gives boy two lovebirds as a gift. Boy gets inspired by the lovebirds to make competing pet megastore, which runs girl's store out of business. Girl closes her shop, gets bombarded by a new breed of killer birds, and confides in an internet friend about her feelings. Internet friend suggests they meet for the first time, girl agrees. They meet in a phone booth in the park. Upon meeting, they realize they met earlier while the killer birds slam into the glass. Girl decides she loves guy despite closing her store. They determine that they are no match for the birds, so boy and girl skip town.
Tagline:
"At odds in life, in love online: the birds are coming!" 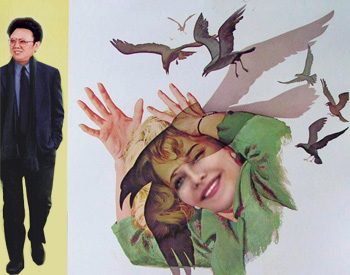 Ryan's Combo #2: "Sorority Row" meets "Three Men and a Little Lady"
Plot:
Three men have been helping a woman raise her 5-year-old daughter, but soon the woman will marry someone else. The men worry about losing touch with "their" little girl. She's is growing up so fast; she even joined a sorority at her elementary school. The story comes to a climax at the daughter's kindergarten graduation/mother's wedding. While playing an elaborate sorority prank to break the mother up with her fianc�, the guys and the daughter accidentally murder four people! The prank did succeed in breaking up the wedding, though. The men and the daughter bond with a strong vow of trust, secrecy, solidarity, and "sister"hood, as they promise to never confess to the prank. They become one happy family of five, and celebrate in the sorority's hot tub.
Tagline:
"They changed her diapers. She changed their lives. Now they share a killer secret." That was weirder than I was anticipating. But I hope it gave you all something to think about. :)