Hello, again, my friends. Sorry for the long delay between posts - trust me, it's not because I haven't had anything to write about! 2010 has been CRAZY so far. And somehow I've been catching a cold about every three weeks?

In the meantime, while I wait patiently for some free time :), I thought I'd tide us all over with an entry about one of my work traditions.

Every winter, my students put together a one-act show and travel with it (sets, lights, and all) to competitions around the state. This year, the competition's theme was "dramas" and we did a beautifully written show by Sarah Ruhl called Eurydice.

The competition show is the only show each year where the students get to write bios for the programs. For fun, most of them like to make up fake facts about themselves for their bios, and a few years ago, they started asking me to make up the fake bios for them (I have to do everything for those kids!).

Here are a handful of the ones that I wrote this year. Since the show was a drama, I had to make them sound at least a little believable. I must say, after several years of writing these, it's getting more difficult to come up with unique ideas. Now I know how hard Tina Fey's job is!

Ari: Ari is a sophomore actor... This is his first competition show, and he landed the role of "The Nasty Man". In order to prepare for this serious role, Ari decided to try "Method Acting." He lived in the forest ala "Survivor Man" for two weeks, changed to a diet of all McDonald's foods ala Super Size Me, and stole two friends' kidneys to fulfill the famous urban legend. After deciding to finally read the script of Eurydice, he realized that none of those preparations were helpful. In his words: "Oops!"

Isabel: Isabel, a junior, serves as props crewhead for her second competition show... When this play was originally proposed, Isabel was unsure if it would be a proper choice for Theatre Guild. However, as TG has embraced Eurydice as its own property, she's seen how entirely apropos it is! She's so thankful the directors included this proposition when picking a play! She believes everyone has propelled the script to the next level. Needless to say, Isabel would like to give props to the entire company. On a side note, please let her know if you've seen her missing propane tank, prophetic notebook, or pro-pig literature.

Devin: Devin is a senior who has spent all four years on sets crew... Devin has decided to devote his post-high-school life to pursuing his lifelong dream of getting a World Record for the longest fingernails. He's been training to the best of his ability considering that sets crew (and high school) require the everyday use of his hands. For the future, he has planned a diet of all blend-able foods, since he will be unable to use eating utensils; he has stocked his wardrobe with only button- and zipper-free muumuus; and he has learned to type and hold a phone with his toes. Good luck, Devin, we believe you can accomplish your dreams!

Ruby: This is Ruby's third year on competition, and is the make-up crewhead... If Ruby could have one wish that she could wish this competition season, it would be that all the children of competition join hands and sing together in a spirit of harmony and peace. If she had two wishes, the first would be for the children to sing, and the second would be for 30 million dollars per month to be given to her. If she had three wishes, first it'd be the crap about the kids, then the money, and then total Theatre Guild domination. Oh, wait, she forgot vengeance against her enemies! She'd like to reorganize: if she could have FOUR wishes this competition season, the first would be the domination, then the money, then vengeance, and lastly, it would be for all the children of competition to join hands and sing in a spirit of harmony and peace.

Kate: Kate, a freshman, is the assistant stage manager of Eurydice... She sees herself as a fairly average girl with fairly average interests. For example, she loves the "Evil Dead" movies, taking pictures of unusual cracks in the sidewalk, and making prank calls in Swahili. Like most 14-year-olds, Kate can't wait to turn eighteen so she can get a full back tattoo of the final scene in Finding Nemo. She has the same "American Dreams" as many young ladies; to swim with the crocodiles, to climb to the top of a radio tower, to own a home with a gray chain-link fence out front, and to have 18 kids (and counting).

Andrew: Andrew is a senior and serves as Eurydice's lights crewhead and designer... Despite the fact that most experts claim that "lightning never strikes twice", Andrew is a glaring exception. He has been struck with lightning no fewer than 8 times (9 if you count the time his mom was struck while he was in her womb). Andrew has become known as "The Human Lightning Rod" in the medical community, and scientists theorize that he attracts lightning because of his habitual snacking on lead paint chips and foods that are high in iron. He's stayed remarkably functional despite all of the electrical trauma, if you don't count his inability to correctly pronounce the word "light" or his lack of color vision. Hope you enjoy his lighting design!

Max: Max is a junior and is on competition for the second time on sets crew... This play has motivated Max to think about the meaning of life and death. It's been an amazing journey for him, and after much introspection, he came to the conclusion that his purpose in life is to save werewolves from extinction. He cannot see a life without werewolves as a life worth living. In his words: "Go team Jacob!"

Joe: Joe is a sophomore on sound crew... Joe's first claim to fame was starring in the 1999 classic Lifetime made-for-TV film, The Boy Who Ate Too Many Refrigerator Magnets. It was a biographical movie. Joe could never resist the urge to eat magnets that looked like ice-cream cones or apples. Even though ten years have passed since filming, Joe still finds metal objects stuck to his belly on occasion. It's actually turned out to be pretty convenient since he often needs to carry a lot of antennas at one time on sound crew.

Daniel: Dan, a senior, landed the role of Orpheus in this year's show... If you had to describe Dan using one word, it would be "GLEEful". Oftentimes, and usually without being asked, Dan will suddenly enter his own well-lit little world and burst into song and dance. Dan's personal motto is "All the world's a stage, and I am merely the star!" Also, Dan is full of the most glee when watching his favorite show, "Glee". Wordplay!
(this one was a bit of an inside joke- Dan is known throughout Theatre Guild as someone who sees shows like "Glee" as the lowest form of art, although, I, of course, love it!) 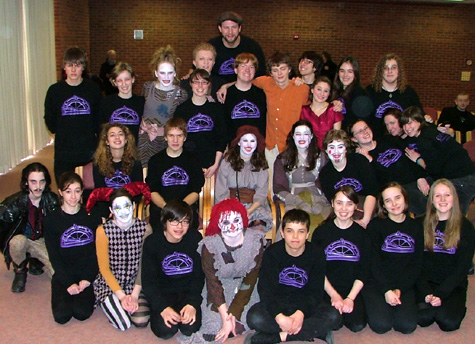 Oh, by the way, Eurydice placed 2nd in the entire state this year! I am very pleased with what an amazing job my students and coworkers did! Congrats, everyone!