Those who know me know that I usually predict things wrong!

Unfortunately, 2009 turned out to be a pretty tough year. Last year...
... I went to no fewer than 5 funerals of family friends.
... my cousin and grandpa spent weeks off and on in hospitals.
... more friends and cousins moved far away or got laid off.
... I suffered through many months of emotionally exhausting friendship drama.

Plus, there were many smaller things that happened that were difficult:
- I got my camera and money stolen from my office at work.
- I had a few health issues that left me incapacitated for several days at a time.
- I developed seasonal allergies.
- I tried to report a significant white-collar crime to a half dozen agencies, and no one cared (why??).
- The best neighbors I've ever had (and their adorable doggy!) got into an argument with their (unreasonable) landlord and had to move away.

And as icing on the cake, Bea Arthur passed away (I was so so sad); my Detroit Tiger got traded (I will miss you Granderson!); and my car's company got sold and then the deal fell through (I wanted to have Saturns for life!).

2009 wasn't a total wash, though. I took a couple of fun mini-vacations, met some cool new people, and witnessed some sweet weddings. A few friends had beautiful babies. I learned stuff, perfected an all-day nap, spent time with friends, and enjoyed many an episode of "30 Rock".

Overall, I wouldn't say that I loved 2009, or really even liked it for that matter. I hate to jinx myself again, but I am looking forward to putting last year behind me and moving on to the new year ahead. I have no guarantee that 2010 will be a better year, but it is already showing some potential. And with that, I present to you:

10. Our spring musical at work is going to be "Footloose". For one, we'll only be working on one show (as opposed to the three we are working on simultaneously now!); and for two, how can anyone be in a bad mood while listening to 80's hits like "Holding Out For A Hero" and "Almost Paradise"?

9. I joined Twitter (follow me!). Actually, I don't know how that could make my year better, but at least it's a nice distraction. :)

8. The Census! Am I the only one who is psyched about the Census? Maybe I like being "counted"? Maybe I just like statistics? Regardless, I can't wait for the packet to come to my house!

7. I already have at least one mini-vacation planned (two of my besties, Karen and Demoree, are joining me to visit another bestie, Sara, in Miami). Now that my fear of flying is slowly dissolving, I can't wait to jet off to new places!

6. My BFF Katrina and her family may move back to Michigan! Her husband has been in med school for the past four years in Cincinnati, and he's hoping to match a residency in SE Michigan this March. It would be unbelievably cool to have them back!

5. Michigan businesses are finally going smoke-free in May! No offense to smokers, but as a non-smoker, I am looking forward to being able to go karaoking or bowling or out dancing and not have to febreeze myself and my car right afterwards.

4. My basement will be officially "finished" soon. I started working with a contractor in November, and the project will be completed within the next few weeks. I am excited to rent out the bedroom down there to a new roommate (maybe one with a dog?)... or if that doesn't work, I have plans for a basement speakeasy. :)

3. I am saying goodbye to my 20's at the end of January. Yes, that's on a list of good things! We all know I have never been a big fan of getting older, but, looking back, my 20's have been filled with so much drama. I am over drama. I am looking forward to some content stability (I hope!) in the decade ahead.

2. I am going to become an aunt! That's right, my brother got his wife knocked up. :) They are due in early March, and my mom will finally be a grandmother (which will take a ton of pressure off of me!). It's crazy, but it'll be very cool.

1. Finally, 2010 could be good because, well, it's a new beginning (as least symbolically). I am healthy, have a job, a condo, and good friends and family, and haven't given up hope. That all has to count for something! 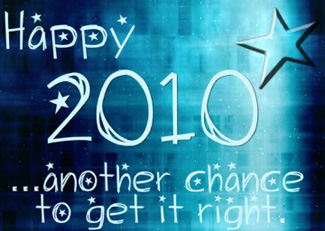 I guess we'll have to wait to see what the next 12 months bring. In the meantime, I wish you a very Happy New Year!