Okay, we had a lot of fun in the last entry laughing about all of the common phrases I used to get wrong on a normal basis. This entry, however, is about all of the phrases I've heard (or read mostly, in this internet age) other people get wrong. And, believe it or not, sometimes I actually got to correct them! Every so often I do get words right. :) 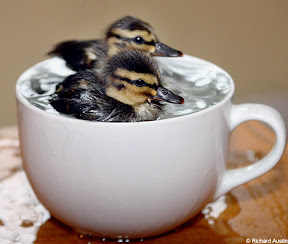 It's really hard to think of appropriate pictures for entries about things like "words", so I hope this picture of two baby ducks swimming in a teacup will satisfy you instead!

People say: french benefits
Actual phrase: fringe benefits
I guess "french" made the benefits sound fancy? They are actually "extra" benefits, which I suppose could be fancy sometimes!

People say: old-timer's syndrome
Actual phrase: Alzheimer�s syndrome
That really puts a cute twist on a horrible affliction. And not only do the words sound similar, but it typically does only affect older people.

People say: cereal killer
Actual phrase: serial killer
My friend, when she was a child, refused to eat her Frosted Flakes because she was afraid of getting harmed by the "cereal killer"! awwwww.

People say: we'll play it by year
Actual phrase: we'll play it by ear
Yes, both could mean "we'll see how things go, and figure it out then", but the first refers to waiting, while the correct phrase has to do with improvising music.

People say: get down to brass tax
Actual phrase: get down to brass tacks
Is there a tax on brass that we want to take seriously? This phrase means "to focus on the solid facts" of a situation. Its origins are only theorized, but could range from furniture building to boots.

People say: bistandard
Actual phrase: bystander
A "bystander" is a spectator of an event. To call them a "bistandard" is to say they are "the two-parted model of a person" instead. Just a little different, although they agreeably sound similar!

People say: take a looksie
Actual phrase: take a look-see
People love being cutesy in the way they talk! But unfortunately "looksie" has not made it into the dictionary!

The craziest part about these phrases is that they are misused all over the internet! I guess that's what happens when anyone can publish anything for the public to read! Next time you're bored, do an internet search for an incorrect phrase and see how many entries appear. :)

The more I learn about the English language, though, the more I realize that sometimes we use certain words and phrases not because they necessarily "make sense" or are "grammatically correct", but because that's just what everyone says.

Check out all the words that have been changed throughout the years just because people started using them differently:

.
So, who knows, my friends' and my mistakes may change the English language one day? :)