Hello, there! This month I had the privilege to be the Maid-Of-Honor in another wedding! This time the bride was my roommate Demoree, and I got to share the role with one of my other bffs, Karen, who was the Matron-Of-Honor.

There are lots of fun stories to tell, but I'll get to that later. For now, I wanted to share with you our speech. This one was a little different from the others in my series because I didn't give the speech myself; we took turns speaking. Personally I enjoyed it! Hope you do, too! 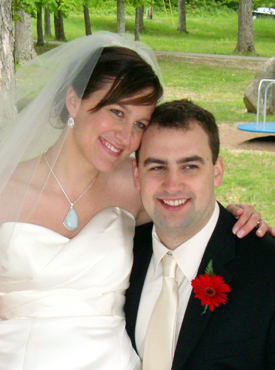 Karen:
I met Demoree 10 years ago in 1999 when we were both 18-year-old freshmen in college. Early that school year someone said to me, "You know who you should hang out with more? Demoree." And I remember thinking, I dunno... She seems really cool, but I don't think she likes me very much. Well, we ended up at a lot of the same events together through our church, and we got a lot of chances to hang out and actually get to know each other. I soon came to see that Demoree was honestly the sweetest and kindest person who has ever wanted to be friends with me.

That year we totally bonded over runs to Pizza House at 3am, hanging out in the lounges in our dorm, and spending countless hours discussing the various boy dramas in our lives. Not only was I thrilled to find someone who turned into an amazing best friend, but considering that I grew up with a brother and in a neighborhood of all boys, Demoree became the closest thing to a sister that I'd ever had.

Ciara:
I moved in with Karen and Demoree in the fall of 2003 and we became bffs almost instantly. The three of us form the perfect trio: Karen comes with the crazy schemes, like performing a choreographed "Saved By The Bell" dance routine; I add my own unrealistic ideas, like us all painting a mural of unicorns on our living room ceiling; and Demoree... humors us until we lose interest.

Over the years, though, we have actually accomplished some great things together, such a couple elaborate Christmas newsletters with plenty of cheesy, yet well-designed, graphics, thanks to Demoree. We've thrown numerous themed parties. And we've managed to keep each other entertained for almost a decade!

Demoree and I have been roommates-- who have shared a room-- for the past four years. And, believe it or not, we're better friends because of it!

Karen:
Back in the day, I remember Demoree used to be, as she would say, "afraid of boys". I didn't really believe it until I saw how nervous she would get in situations when she just had to talk to boys. And then there was this time one summer when she had to run an errand to a house where 12 guys lived, and she accidentally interrupted them during some sort of "Male Bonding Time" that involved all of them shirtless sitting around a huge tub of macaroni and cheese. I think that incident alone added an extra 5 years to the time it took her to get over her boy fear.

And then even when she got over it, she had another fear- that she'd never find that one great guy who would eventually become her husband.

Ciara:
In the meantime, I met Brian after church one Sunday in 2004. I determined right away that we would be best friends since we both had Mechanical Engineering degrees- it doesn't take much!

He and Demoree met the next fall, and soon after Karen and I decided that they were meant to be. They are both small-towners, are super friendly, and love watching television and eating pizza. They would even often show up to parties in the same outfit... completely accidentally!

Ironically, in our Christmas newsletter that year, in a "What Are You Asking Santa For" section, Demoree answered: "Can I have three things? I want Tall, Dark, and Handsome". Although Demoree's a little too old for Santa, it seemed like God took over and gave her exactly what she wanted. They started dating that January!

For real, I cannot even put into words how overjoyed I am. I love you both, and I am so happy that I have been able to witness your love story from the beginning. It brings me so much joy to stand here and support you both today. Demoree, after waiting patiently all these years you are finally getting that guy that you've always hoped for, a man who has pledged his heart to only you and who will cherish you the way you deserve.

Brian, you are gaining a beautiful, creative, intelligent, wise, thoughtful woman with a generous nature and a selfless heart. It's your job now to love her and care for her as I know you will. She is your best friend now, but I still hope you'll share her with us sometimes.

Ciara:
Demoree, I'll miss having a best friend living with me. I'll miss waking up to you falling out of bed in your sleep. I'll miss collecting the dozens of half-filled glasses of water you've left around the condo. I'll miss tag-teaming with you when we have to smash enormous centipedes. I'll miss keeping you up at night sharing stories.

You have taught me how to be a better friend, and helped me become more compassionate and patient, and enjoy the simple things in life. And in turn I've taught you that cereal is perfectly acceptable as dinner. I'd say that's an even trade, right?

Brian, you've been such a loyal friend to me, and I've seen how loving and selfless you've been with Demoree. I suppose if I have to lose a roommate, I couldn't have asked for a better reason. I know just how happy you make her by the look on her face when she sees you.

Also, I just wanted to thank your families for letting us be a part of the wedding! I can't imagine how entertaining, loud, and loving Brian and Demoree's family get-togethers will be! We can all be in-laws now, right?

Karen:
I know that God has amazing things in store for you both. Congratulations and cheers!

Of course I wouldn't deny Brian and Demoree my amazing photoshopping skills, as I have done for other couples in the past. Here's my glimpse into their future: 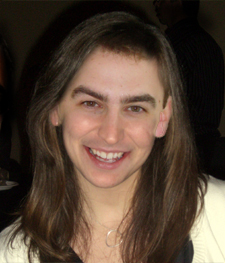 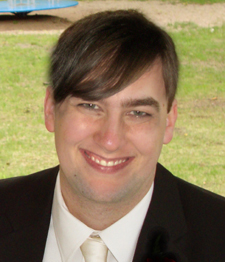 Ironically, Demoree was one of the people who taught me most of what I know about altering pictures. Maybe she regrets that now? :) Or maybe not! In my opinion, these are two of the most normal looking children I've made so far!

Congratulations to the newlyweds!