Well, apparently I didn't make myself clear enough. :) I want to see your
Strainer Lists! If you think of things, please post them on your websites or in your Facebook notes or something! Together, we can make this a "thing"!

Having trouble? I wrote out some clearer criteria (which you can post along with your own Strainer Lists to explain it to the masses if you want!):

1. It's the opposite of a "Bucket List"; it's a list of things you don't want to experience before you die.
2. You don't include things that everyone would include (like "my house catching on fire"); it has to be personal. Other people might not mind if some things on your list happened to them.
3. This is not just a list of "stuff that would suck". The list should include things that at point/s in your life just the thought of them has completely freaked you out.

To inspire you further, here are a few more from my list:

1. Get something around my neck get caught in something with an autofeed.
Like a necklace caught in a saw, the drawstring of my hoodie in an escalator, even a stereotypical tie-in-the-shredder, I've dreaded them all!

2. Get a scar on my face that looks exactly like what caused it.
I just don't want to think every time I look in the mirror, "ug, that stupid waffle iron/chain link fence/hoof/whatever"!

3. Throw up at my wedding.
This happened to my aunt! She was on the altar when it happened! And I do tend to get an upset stomach during big events...

4. Have my knees give out somewhere high up so I fall.
I think this goes back to cheerleading camp. I over-worked my knees there so badly I fell every time I tried to stand up for a few days. I still get a little nervous sometimes that my knees aren't going to work!

And here are some that people in my life have shared with me after reading my last post (hope it's okay, guys!):

1. Has to drive in New York City.
Understandable, but possibly unavoidable since he'd like to live there one day...
2. Gets a robot arm as a replacement for a missing arm.
Yeah, robots always eventually turn against humans.
3. Is in a survival situation where he'd have to eat raw nature.
Whereas I wouldn't want to drink my own urine, he'd just like to avoid eating snails and leaves and such!
4. Has to eat a fancy dinner he thinks is gross.
He pictures having to eat something he dislikes, like caviar or octopus (or even spaghetti sauce), at an important dinner where he has to eat it to be polite, and it being tortuous.

1. Buys something really soft to wear, but gets a rash or infection whenever she wears it.
Maybe she feels like she's get a psychological connection and never be able to wear anything soft again!

1. Opens her car door on the freeway.
"I don't know why, but I always get nervous I am going to get an urge to do it!"
2. Gets attacked by a pelican.
She came very close once!
3. Gets her ankle wedged in a revolving door.
Ouch!

1. Throws up in someone's mouth.
Ewww! Aren't most people afraid that it will happen to them and not that THEY will do it?
2. Gets a flat tire.
I tried to convince him it could be not so bad, but he wouldn't hear it!
3. Has someone he knows die of Toxic Shock Syndrome.
"It can happen to ANYone at ANY time!"
4. Sees a cockroach.
Ick, I also am not fond of arachnids. And cockroaches run so quickly!

1. Bleeds to death shaving her legs.
"I just think it would be such a sad way to go... and I wouldn't go to the hospital because I'd think it wasn't a big deal..."
2. Gets sent to a mental institution when she's not really crazy.
I think this actually used to happen to people all of the time. So tragic.
3. Tries on tight pants at a store and has to ask the salesperson to help her get out of them because they're stuck.
"Can you imagine anything more embarrassing?"
4. Loses a hand and has it replaced with something that's only specifically useful, like a whisk.
So I imagine she's not a fan of Edward Scissorhands!

1. Finds a goldfish in something she's drinking.
She HATES goldfish, so having one in her drink is like her ultimate fear!

1. Wins the lottery but not enough to share with anyone.
Well isn't he a nice person? I think he was being serious when he said that... :)

1. Is on "Man Vs. Wild".
Me too!
2. Has the ability to understand what birds are saying.
"Can you imagine? You'd go outside and all you'd hear is chatter!"

1. Is in a situation where she is forced to jump out of an airplane.
As long I was afraid of flying, I never actually pictured that happening to me!
2. Has a fingernail pulled/ripped off.
*Wince!*

Just so you don't think I am the most pessimistic person in the world, I do have a short Bucket List. There are some things I would like to experience! 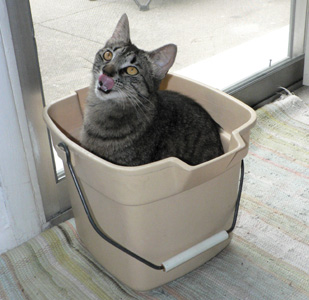 Zooey in a bucket - Bucket List, I know it's a bit of a stretch, but since you all MAKE me include pictures, you'll have to accept it!

1. Be fluent in Hawaiian.
How cool would that be? Plus they only have 13 letters. I could handle that, right?

2. Go on a inter-country train ride with my family.
What can I say, the film The Darjeeling Limited inspired me!

3. Publish a novel.
Who knows if I can do it? But it's my Bucket List, so I can include anything I want to!

4. Be a guest singer for a rock band.
I'd love to sing a crazy powerful ballad, something sounding like "River Deep, Mountain High" with a full band in front of a live crowd. It's so enticing! And I only want to do it once!

On that optimistic note, I'll let you get back to your thinking! Much appreciated!