Everyone has heard of a "Bucket List", right? It's a list of things that people want to do, experience, or accomplish before they die. I am not a huge "goal" person, but I realized recently that there are certain things that I don't want happen to me in my lifetime!

Therefore, I am going to introduce to you all my "Strainer List" (a strainer is sort of the opposite of a bucket, right?), which is a list of things that I specifically hope I won't experience! 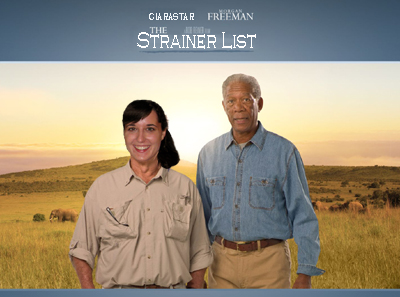 I blame Jack Nicholson entirely for how awkward my head looks on his body!

There is a general ground rule for Strainer Lists (hey, I coined it, I can make the rules!): there is no point in including things that almost everyone would include (like waking up during surgery or having your house catch on fire, for example). The beauty of a Strainer List is that it's personal. There may be something on my list that you don't necessarily worry about, or wouldn't mind happening. Likewise, there may be some things on your Strainer List that I might want for myself, or have already happened to me (i.e. "break a bone") and haven't been so bad for me :)

Also, for my website, I am not including everything because these things really worry me, and therefore I feel nervous putting them out there. I wouldn't want someone to manipulate a situation to make one of my Strainer List items come true just to tease me! Oh, and no accusing me of being paranoid after reading this!

2. Get my teeth knocked out in some sort of freak accident.
When I told my students this one, Leslie said, "You mean like getting older?" haha!

3. Get addicted to plastic surgery.
I know, you may be thinking this is totally preventable and I certainly am not planning on getting any plastic surgery as of now, but what happens if I get older and I don't look like myself? And I just decide to get one little nip or tuck and can't stop??

4. Go to jail (especially for a crime I didn't commit).
The system definitely works for me!

5. Am in a survival situation where I'd have to drink my own urine.
Yeah. Gross.

6. Have chronic hiccups.
Hiccups annoy me when I have them for five minutes! I can't imagine what these poor people go through when they have them for months at a time!

7. Get my fingers cut off.
I think I only worry about this because I work with saws every day. Usually I see our saws as completely safe, but if that's true, why do shop teachers tend to lose a finger or two?

8. Find out later I did something crazy in my sleep (like drive).
This is the sole reason I don't ever take sleeping pills. I already am a pretty active sleeper!

9. Have an elective procedure that goes horribly wrong.
I don't want to do something silly out of vanity and have it end up much worse... like get a chemical peel because I have big pores and then get first degree burns!

10. Put my bare feet into a pair of shoes with a scorpion/stinging bug in them.
This happened in a movie I saw when I was really little, and every once in a while I still check my shoes to make sure they're empty!

11. Live to be over 105.
I mean, maybe I'll be sharp as a tack and be full of energy when I'm that old, but I don't anticipate it! I don't feel energized or sharp most of the time now!

12. Have a child who is a Hollywood star.
They just don't have a great track record for turning out "well adjusted".

13. Be a full-time student again.
I loved college when I was in it, but I am definitely happier as a working adult!

14. Have more than 2 babies at the same time.
Can you imagine me as an octomom? I think one baby at a time will be enough for me!

.
What do you think? Dread any of those things? :)

One thing I like about Strainer Lists is hearing other people's. I asked some of my students what would be on their lists. I found it pretty interesting, so here they are for your enjoyment! 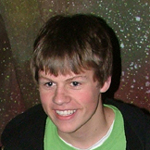 1. Gets his fingers to get caught in a car window.
"Especially from the outside while it's moving, where I'd have to run alongside the car!"

2. Wakes up with a body part missing.
Like a kidney maybe? Or an arm?

3. Gets swept up in a government conspiracy.
He wouldn't mind if he planned to be in it...

4. Has something cartoony fall on his head.
Like a ton of bricks, an anvil, a piano, a flower pot, etc. 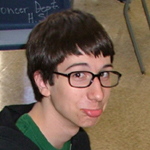 1. Gets amnesia and remembers not wanting it.
"It'd be okay if I forget not wanting amnesia."

2. Gets a superhero power that's a burden.
"Like I don't want to have the ability to fly and then have to fly people around all of the time. It'd be especially bad if I got the power from a government experiment, because then people would be like, 'just do it, it's MY tax dollars at work!'"

3. Swims in water where he can't see the bottom.
He says it's happened before, but he doesn't want it to happen again!

4. Accidentally gets a bad tattoo.
I thought this would be preventable, but he worries about his mind-set at the time of tattooing!

5. Has a dog bigger than a child he has at the time.
I agree, that would be a little creepy.

6. Gets a life-threatening injury or illness in (what is considered to be) a third world country.
That's justified!

7. Goes to the Emergency Room for something that was his own fault.
He would just be too embarrassed! :)

.
Oh, and my lovely roommate Demoree threw one in, too: 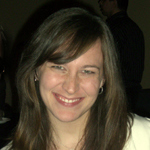 1. Get a fishhook caught in her face.
Ick! Apparently one came close once and she now steers clear of fishermen!

.
Okay, friends, I implore you to come up with your own lists! Although I am warning you, it's not as easy as it may seem. Remember, it's just things that you don't want to happen, not everyone!