Whew. I have decided to start my 2009 on January 26th this year (the Chinese New Year) because I don't want the busyness of my first couple weeks of 2009 to set the pace for the rest of the year! Not only did I find a way to jam-pack every minute of my "break" with fun, but I came back to working 6-7 days a week for the foreseeable future!

Needless to say, I can only keep up the energy to maintain a schedule like that for so long before I start to lose it a little. :)

Before I get to that, however, I wanted to give a quickie update of some Christmas gift highlights: 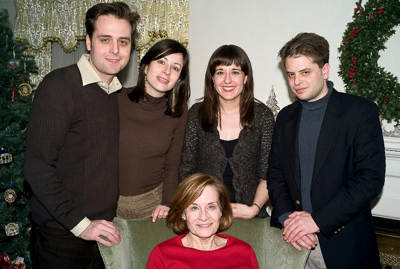 What would a Christmas update be without the standard family photo?

1. Lip Gloss: I asked my mom for tinted lip gloss for a stocking stuffer (uhhh, because she'd pass it on to Santa, I mean) and I received a lovely hue with a "caramel latte" flavor. As it so happened, the consistency also was that of melted caramel! Ever since Christmas, I've had the pleasure of smearing sweet caramely goop all over my lips!

2. Family Camera: After breaking both of my cameras last summer, I asked for a new little point-and-shoot from my mom. Since my mom always busts out disposable cameras that she "found" and "has to finish" (apparently there are hundreds of half-used cameras hidden all over her condo), my brothers decided to buy her one as well. Ironically my brothers bought my mom the same camera that she bought me! We're pretty used to that in my immediate family, but were surprised to find out that four of our cousins, one aunt, and one girlfriend of a cousin also received that very camera for the holidays! We should put our names on our cameras before the next family party... and buy stock in Canon. :)

3. The Softie Wrap: On the Saturday before Christmas, I went with my mom to the mall to help her finish her shopping. Our last stop was at Sears to look for a new washer to replace her broken one. Right across from the appliances I saw this amazing thing: a blanket lined with fur that could be converted into a robe! I was in awe about the brilliance of its invention; what a great idea! I raved about it to mom, and commented that I needed to buy one at an after-Christmas sale.

To my surprise, on Christmas day, our family friend Roger came over with gifts for everyone and he had bought me a Softie! I looked at mom, assuming she told him to get it, and she said, "Ciara, he bought it weeks ago!" Man, sometimes you really get the "perfect gift", even if you didn't know it existed until just before you got it! My new Softie! Not to be confused with the (non-convertible single-layer monkwear-like) Snuggie.

I wish I could give highlights of the wonderful extended times I had the pleasure of spending with friends and family (which are the more valuable gifts), but I'll never have time to post them all! Hope you also had wonderful holidays!

As a result of my refreshing break and getting back into the swing of work, my tiredness definitely caught up with me. I would like to share some true-life examples of how this has played itself out over the past couple of weeks. Because it's been simply ridiculous. Though I have no one to blame but myself (and work!) for running on empty lately!

Example:
I bought my roommate Demoree Super Scrabble (more spaces, more tiles, more points, more fun!) for her birthday and we were super excited to play it. We had the following conversation in fact.

Counting can be so difficult sometimes.

Example:
I filled my car with gasoline on my way to work and spotted a highway service van in the parking lot. On the side of it were listed all of the helpful services they offered (jump starts, spare tires, etc) and it said: "AAA Batteries available for purchase and install."

And I thought: "What a waste. Cars don't use AAA batteries!"

It wasn't until I thought a little longer that I realized they were referring to the company AAA and not the size of the batteries!

Example:
I had to drive along a rural highway to a neighboring city to pick up some equipment for our sound crew at work. On the way, I passed this sign: 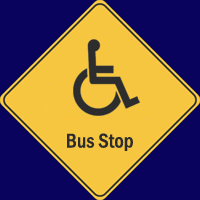 It made me pretty angry, actually. I thought, that's just like Michigan, to put a handicapped bus stop along this rural road. I became sad thinking about the poor people who would have to crutch and wheelchair along the gravel shoulder with no streetlights. I mean, would it kill the city to put in a sidewalk for them?? Don't they have enough to deal with?

Then, of course, I realized that it was probably a school bus stop for the one physically challenged kid who likely lives at the farmhouse whose driveway was right next to the sign!

Example:
On one particularly late night at work, I was driving home and heard a commercial on the radio saying,

And I (as embarrassed as I am to say it) thought, "Who on earth would make time to go to a folk festival if it's only 30-seconds long??" I even tried to come up with some logical explanations (I mean, I do live in a quirky town) before finally realizing that, of course, it's the "32nd annual", as in there have been 31 previous. Ug!

Oh, my, I am so tired!! I swear I am a little more logical normally!

Yet, oddly enough, yesterday at work my coworker asked me, "What's 12 times 16?" and without thinking I immediately said, "192?" and was correct. So, despite the fact that my conscious mind is a jumbled mess, luckily my basic human functions, like breathing, blinking, and apparently multiplication, are still working normally. :)

Hope your 2009 has included a little more sleep than mine so far! Have an amazing year, friends!