While the rest of you are probably spending this month getting ready for the holidays, I've been preoccupied thinking about bizarre activities and obscure cartoon characters. Although I guess those things aren't necessarily mutually exclusive. :)

Last year I stumbled upon what apparently is now a new tradition at work: writing student bios for our Competition play program. "Competition" is our yearly one-act show that travels around the state and competes for awards for acting, tech, and design. There are usually only about 30 kids involved, and it's our most competitive (naturally) show to get into.

The state's competition organization alternates between dramatic plays and comedies every other year. Typically, during the comedy years, the students try to write bios that are more on the funny-side, usually involving fictional accounts of absurd past experiences and talents. During the drama years, the kids tend to share their actual experiences and skills.

For last year's drama, a few of the students didn't feel like coming up with their own bios and approached me to do it for them... and I got permission to just make up the answers to the questions (as long as they were "believable" - nothing fantastical)! What were they thinking? :)

The sad irony is that I think that my students are so much more amusing than I am (their little minds are so... random and fascinating), but how could I turn down such an interesting challenge? I get the opportunity to try to be inventive and funny (to teenagers, no less!) with no real consequences if I fail (I'd be a ghost writer!).

Surprisingly, they were really well received and this year, for our comedy, I was given a stack of bio questionnaires to fill out, all due this week. Work went from helping kids build scenery to asking strange questions of my co-workers, like, "Who did Alice play chess with? Was it the caterpillar? The Queen of Hearts?" and "What would be the most disgusting fiber that you could weave a tea cozy out of?"

While this year's bios are getting compiled, I thought I'd share the ones from last year. The show, A Lie of the Mind, was a pretty intense Sam Shepard drama centered around an abusive relationship between a husband and wife, Jake and Beth, and their dysfunctional families. I don't think my bios ended up nearly as deep as the plot! 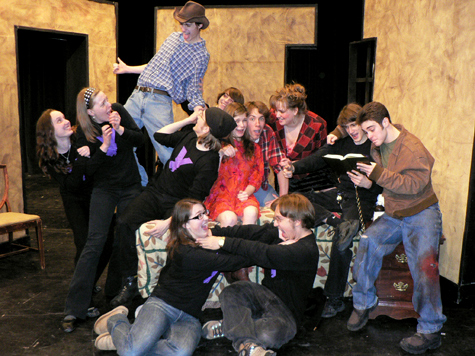 Kids with this much personality shouldn't need me to be creative for them! Here are our seniors from last year doing what they did best: being ridiculous.

Here's what the kids filled out on the bio form:

Name:
Grade:
Number of Theatre Guild shows:
Name shows and how you were involved:

Here's what I answered for them:

Q1. What interests do you have outside of Theatre Guild?
Q2. What did you do in order to prepare for the emotional load of this show?
Q3. Anything else you would like people to know?

And here's how our student producer Maddie (bless her heart) put them together:
I skipped through some of their show history, fyi
Hope you enjoy!

Zoe: Zoe, a senior, has participated in... Thoroughly Modern Millie, Comedy Troupe... In her first Competition play, Zoe acts as Jake's mother Lorraine. She was very excited when she found out she was going to play Lorraine, mostly because they share the same interest in themselves. Zoe would like you to know that she is willing to sell signed headshots of herself for only $15 each. "Trust me, it's a worthwhile investment AND a beautiful decoration."

Leslie: Leslie, a dedicated junior, has participated in nine previous Theatre Guild shows on sets crew... also is a business manager for TG... To prepare for the emotional load of this show Leslie sat alone in the ice-cold theater office after school for over an hour. The isolation in the office didn't come without consequence, considering she lost a finger to frostbite and now finds it difficult to use a drill.

Nicholas: Nick, a freshman, has participated in Thoroughly Modern Millie, in which he served on sets crew... as a freshman on sets crew it is only natural that he gets the dirty jobs, like sweeping, mopping, and animal sacrifices. Besides theater, Nick enjoys Italian fashions, interesting doors, acrobatic killer whales, and Days of Our Lives. He would like you to know that this play is just like his life, except his life doesn't contain any violence, fighting, or adult themes.

Kelsy: This super senior has worked on eleven previous shows with Theatre Guild... started out as a sound crew master... then decided to explore her stage managing skills... For her second Competition play Kelsy is assistant producer, which is basically taking care of things people forget to do. To be able to stage-manage and assistant produce, Kelsy learned important organizational skills from playing video games. In fact, she played the original Nintendo Tetris for 37 hours, up through level 35, to prepare for this show. In her words: "I've beat Legendary on Halo 3 blind-folded five times. Last Night! Boo-ya!"

Lia: Lia, a devoted senior, has participated in ten previous Theatre Guild productions. She steadily climbed up the TG ladder, serving on props crew... set decoration... stage managing... now props designer. When Lia is not doing lots and lots of the unbelievably hard work that goes along with Competition, she enjoys racing Slinkies down the stairs, having staring contests with her stuffed animals, and participating in man verses beast competitions. Lia is also a world-champion wrangler, and has used this skill a surprisingly large number of times with our cast and crew.

Annemarie: This determined and enthusiastic senior has participated in fourteen Theatre Guild productions. The highlights... are playing Julie Jordan in Carousel... and Lenya von Brunno in Bullshot Crummond... In Annemarie's third competition play, she plays Sally, Jake's sister, and is also the graphic designer. Besides her extreme interest in theater, she also loves crocheting hats for underprivileged children, Flavor of Love marathons, and Kenny G. Annemarie would like you to know: "I shaved a cat once."

Madison: Maddie, a dedicated junior, has participated in eight previous Theatre Guild productions... she served on makeup crew, paint crew, and has been on stage as well. For her second Competition play, Maddie is the student Producer, which includes taking care of many seemingly random details, and she is also co-costume/makeup/hair designer. Tackling those jobs makes Maddie extremely hardcore. She is so hardcore, when she spits, she spits rainbows; and when she sneezes, she sneezes buttercups! "What up now? WHAT UP NOW?"

Porscha: This senior has participated in thirteen previous shows with Theatre Guild. She served as house crewhead... and worked on various crews... and has been onstage as well. This is Porscha's first Competition play, for which she serves as the assistant director... Porscha has been known to dance, sing, and love culture and exchange students. "By the way, if you know any exchange students, give them my contact information! Thanks!"

Benjamin: This committed senior has worked on nine previous shows with Theatre Guild. Benjy has devoted his TG life to lights crew... Something people don't know about Benjy is that he loves trying new things. In fact, he will try anything at least once; well, except for using the Internet, lobbying for gun control, thinking for himself, and voting. He has to draw the line somewhere.

Andrew: This hard-working sophomore has participated in seven shows to date with Theatre Guild. Andrew has served as a loyal lights crew member... Andrew sometimes gets confused about random details. For instance, when he talks about this Competition piece he will call it "The Untruths of the Brain". This confusion was probably caused by his time fighting a flaming shark battalion while he was in the Navy, or by his overindulgence of pie.

Kate: Kate, a junior, has worked on seven previous productions with Theatre Guild. After working on props crew, Kate decided to try a hand at stage managing... Her job as assistant stage manager has allowed her to utilize crawling into her favorite spaces, like closets, caves, vents, gopher holes, and empty elephant skulls. In fact, to prepare for the emotional load of this show, Kate crawled inside an empty elephant skull at a museum and stayed there a while. She wondered, "How many times did this elephant lie?"

Miriam: Miriam, a magnificent sophomore, has participated in six previous shows with Theatre Guild. Miriam quickly rose on the TG ladder, becoming lights crewhead... Miriam has a real passion and connection to lights to the point where she feels they can speak to her. But she finds that she hears the lights better after drinking Red Bull. So she drank a 12-pack, turned on all of the colored strip lights, and spun around until she passed out. When she woke up two days later, she felt prepared to do this show.

Loren: Loren, a senior, has participated with two other shows with Theatre Guild to date... For his first Competition play, Loren serves on the general stage crew. To him, this show is like a hazy forest moon illuminating a shallow stream and two angry squirrels. Loren would like to let you know: "We do no lighting-lab testing on animals."

Devin: This devoted sophomore has worked on five previous shows with Theatre Guild... Devin served on sets crew and lights crew... Devin knew that to be fully prepared for this show he had to lost his funny side and become sad. He tried frowning for an entire day, but that failed to make him sad. Then he denied himself Hannah Montana for an entire week, which made him extremely gloomy, and he knew then he was prepared. In his words, "Your face is 'a lie of the mind'!"

Ruby: Ruby, a zealous sophomore, has participated in six previous productions with Theatre Guild. For Disney's High School Musical, Ruby outdid herself serving on makeup, props, and house crew... Finally she decided makeup crew was her calling... Unless you really paid attention to Ruby's wardrobe, you wouldn't know that she only wears pink on Wednesdays, jeans on Fridays, and her hair in a ponytail once per week. She would like to let you know: "I love Kalteen bars! Yum!"

Danica: This junior has worked on seven previous shows with Theatre Guild. She diligently worked on props crew... To prepare for this play, Danica changed her name to "Danger". No one seemed to remember she changed her name, so she changed it back. When she was in the process of changing her name, Danica gained a superpower: "When you read my bio, no matter where you are, I CAN SEE YOU!"

I am weirder than you thought I was, right? :) It's a side of me that comes out the most at work!