Well, folks, I have tons to update you on, but since I have a lot of unpacking to do (ooooh... foreshadowing!) I thought I'd just give you a little overview of my recent trip to my mom's 90th family reunion in North Manchester (population 6000), Indiana, that I took with my mom, brother Dante, and soon-to-be sister-in-law Olga.

Highlights of the trip included:

1. Stopping at a roadside KFC/Gas Station/Convenience Store on the way down. At one point mom, Olga, and I were heading back to the car and Dante was still in line buying orange Hostess cupcakes and Red Bull. I jokingly yelled to him, "Bye, Dante! Good luck finding a bus to take you the rest of the way!" Apparently after we walked out, the checkout lady, with concern on her face, asked Dante if he needed help finding his way to the Greyhound station!

2. Seeing my mom's brother Uncle Bill for the first time in about 10 years! 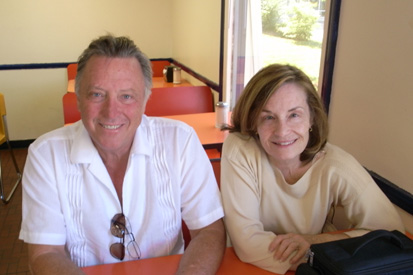 3. Quoting favorite Saturday Night Live lines ("I am so hungry." "Me, too!" "I said WE!!") with Dante while mom and Olga argued about politics.

4. Staying at a renovated version of the cheap motel my family stayed at in the 1980s. We all have uncomfortable memories of "The Haven"... including making Davidde sit at the end the bed while we watched TV because the remote was attached with a 4' cord to the TV stand, avoiding large flying bugs in the barely lit shower, guessing where the sheet stains came from, and me sleeping on two chairs pushed together (since my parents and brothers claimed the beds!). Thankfully the "Treeway Inn", as it's now called, is under new management and has new amenities!

5. Eating a delicious home-grown and home-made dinner with 65 of my family members at an Amish farm. I don't know what else to say about it... but the Amish are probably as different as you can get from the city-folk where I live! Let's just say there was yodeling involved.

6. Desperately searching, in vain, for an open place to eat breakfast on Sunday morning and ending up at a little 24-hour donut shop, where the first thing we heard was a Vietnamese immigrant, of all people, asking us, "You're not from around here, are you?" :) 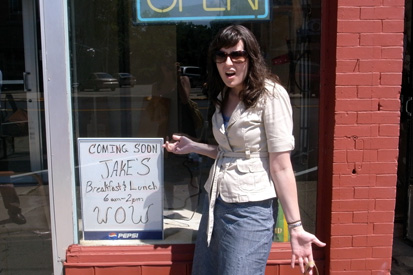 Opening SOON?? We are hungry now!

7. Getting inspired by epitaphs at the family cemetery. My great-great grandfather Jacob's was "He has gone to the mansions of rest". Not bad! I think I want mine to be something like... "Finally! A chance to relax!"� or, as my mom suggested, "See? I told you I was sick!" :)

9. Noting the interesting signage around town: 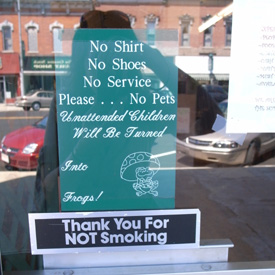 "Unattended children will be turned into frogs!" at the Main View Cafe. 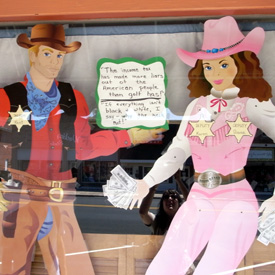 Cowboys say "The income tax has made more liars out of the Americans than golf has! If everything isn't black & white, I say 'Why the heck not?'" outside a local law firm. 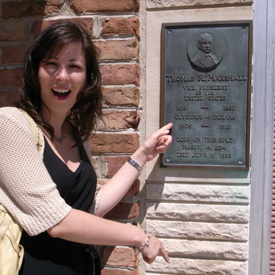 Vice-president Thomas R. Marshall was born "on this spot" in March of 1854. Ew!

10. Antique shopping with my cousin Sharon. I only purchased a couple of old-timey postcards, but we had lots of fun checking out the large selection of unique things. I even made a music video of part of the trip for your enjoyment:

(This video was inspired by my friend who made a strawberry-picking music video with her husband earlier this summer. Thanks for the idea!)

Ah, good times. Here's to another 90 years of fun, family!