The high school theater I work for needs to be a little less ambitious. :) I mean, we thought that last spring's "The Wizard of Oz", with its dozens of scene changes and large handful of special effects (including "flying" Jitterbugs, a tornado, and melting witches), was a lot of work. But no, this spring we had to one-up ourselves, as usual.

For our spring musical this year, the students (who get to vote) and my coworkers thought that doing a brand new version of "Willy Wonka" would be a reasonable choice. It technically only uses two locations-- a small town and a factory-- but the new script called for so much more... and of course it was our goal to do it all...

I thought that my experience could best be summed up in the following song. Hope you enjoy. 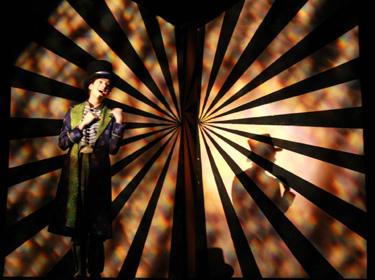 I never thought "Willy Wonka" could be
Anything but catastrophe.
The special effects in the movie
Seemed impossible to me!

We had to make Golden Tickets,
Oversized golden twinkles, hung so high!

I've never made a candy boat,
Never a chocolate river too.
Then suddenly we needed mini-Mike-Teavee
And fifty Oompa Loom(pa)s.

We had to make Golden Tickets!
It's our job, Charlie!
And we had to send Augustus through a pipe!

I never thought I'd see the day
When I could sleep 12 hours and say
'Good Aft'rnoon!', look at the clouds!
I never thought that we would be
Done with the chocolate factory.
'Cause I'd have said:
'It couldn't be done!'

But it can be done!

I never dreamed that we could fly
Wonkavators and Fizzy Lifting peeps
But nevertheless, we pulled it off,
Plus a shrinking room - yippee!

'Cause we made huge Golden Tickets!
We've got a golden woodshop in disarray.
But since we finished the show, it's a golden day!

I never dreamed that we could make
Violet turn into a blueb'rry
But nevertheless, we pulled it off
With extra candy for me!

'Cause we made huge Golden Tickets!
We've lots of golden props to put away.
But since we finished the show, it's a golden day! 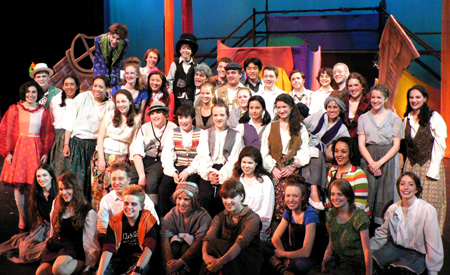 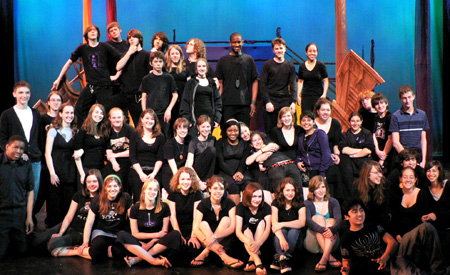 And it only took this many students to do it!

But, as usual, it all ends up being worth it. We even had the honor of hosting the author of the new script of "Roald Dahl's Willy Wonka", Tim McDonald, come see the show and he adored our rendition. We can't complain about that!

Only one small show left and then it's finally summer vacation. That's what makes all of the hard work the most worth it. :) Good job, kids!

Thank you to Jascha Wilcox for the top photo.