Isn't summer nice? I don't know about the weather wherever you are, but here the air has been clear, the sun has been shining, the breeze has been gentle... and I have been napping! I know that's no excuse for my infrequent updates, but can it be an excuse for me not writing about my new job situation? Please? Even if the situation changed about six months ago? :)

Let me back up a minute. Last fall, I went to start working at my normal jobs� (1) High School Technical Director & Lab Instructor, (2) Scene Shop Supervisor, and (3) Biomechanics Research Assistant� but then everything changed. I was informed that my 2nd job became students-only, so I had to be "let go" (I am too old!) and I found out that my 3rd job lost its funding (to war-related research), so there were no more projects for me! I had worked at the scene shop since I was a freshman (1999!) and I had worked at the lab since I was a junior (2001!), so understandably, I was pretty sad to give those up... and I was also pretty poor.

I decided to wait until I got another job (I mean, I'd love the high school to pay me enough to live on, but...) to update you all, but then I hit some� bumps in that road, we'll say. First, there was the promise of a research grant at my lab which would mean more projects for me to work on... which they updated me on for 4 months before they informed me that it didn't come through. Then, there was the English Language Institute, which needed help grading English Proficiency exams... but my contact person strung me along for about 2 months saying she'd get back to me, and then she took a 4-month leave of absence. And THEN, there was the florist, which told me that they were "desperate for help" and I would most likely get "hired right away"... but then they stopped returning my phone calls. Huh. Around January, I decided just to give up looking for a job and just get used to eating cereal for every meal to save money.

But then.... out of the blue... my friend Brian came up to me and asked, "Hey, do you want a job?" I thought he was joking, so I said, "Yeah!" and he thought I was joking, so he was like, "Alright," but then after about 15 more minutes of that, we realized we were both serious! He's getting his PhD in fluid mechanics (which is indeed a type of mechanical engineering, despite the fact that in undergrad I only had about 2 weeks of class in it) and was desperate for lots of manual labor and some organization and a little data processing. And I was desperate for money, so the job was a match made in heaven! 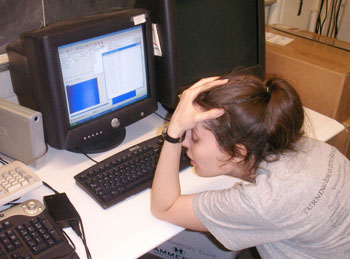 This is how Ciara feels about mechanical engineering data-processing for 8 hours a day. 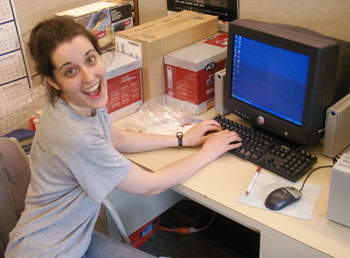 But this is how Ciara feels about earning money to live on and working with her friends!

Am I ever going to get a job where I have to wear "business" attire? Hm. It's an interesting question, but for now, I just have to keep my ripped jeans and old t-shirts handy, it seems!

So, I could explain what kind of research we did/they do in the lab, but I think it'll only confuse us all. So I'll just say it has to do with boats and friction and this goop they call a "polymer" and you'll just have to use your imagination!

Going into this new job, I knew that it would include all sorts of specific tasks, like assembling large metal devices, crunching numbers, figuring out how to make textured surfaces, etc., and I definitely did those. What I didn't realize is what I was really doing there� filling there two biggest gaps: a gap for fun, and a gap for SAFETY!

To say I am obsessed with safety is an understatement, probably. I mean, I have been trained to be safe with my jobs over the past few years, I have heard countless stories of unsafe situations from both the machine shop during undergrad AND at the hospital after my car accident, my best friend is a nurse, my mom is slightly paranoid� the list goes on and on. So let me tell you, my first couple of weeks were quite a challenge! For example: 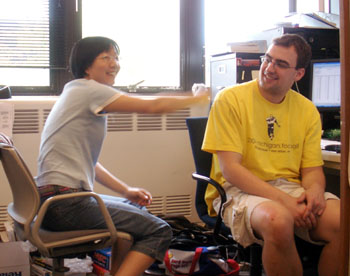 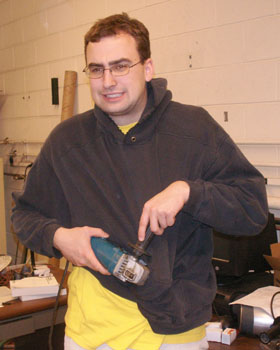 And yes, Brian is technically my "boss". Here he is with the angle-grinder caught on his sweatshirt. We say no loose clothing for a reason! And where are your goggles? Although, I must admit, the sound it made was pretty hilarious. :)

I told Brian that every time he made me use a chemical that could kill me, he would have to pay me for an extra hour that day, which he agreed to. Needless to say, I spent most of my spring working in the cold, yet well-ventilated parking lot, and I made enough money for a least one bridesmaid dress! 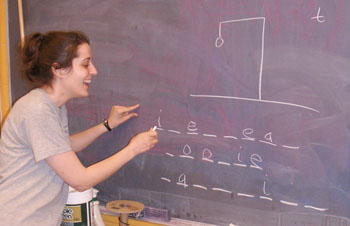 We clearly only had one thing on our minds!

Since July, my team has been in Tennessee doing a big, expensive experiment and I really miss them (and the income), but they should be back in about a month (cross your fingers!). That job was hard work, but it was a good kind of hard work: a bonding kind of hard work, and if this project doesn't wear out my coworkers too much, hopefully I'll be back with them in the office for at least a few hours this fall!

I'll leave you with some quotes from work, because really, that's what I do best.

Ciara: "You should get free ice cream on your birthday. At Stucchi's, you can get it free even if someone else doesn't buy one."
Brian: "I don't care, that is odd!"
-4/19/06 (no one really thinks free ice cream is odd! he got distracted by a girl doing jumping jacks on the street corner)

Ciara: "What time is the Pistons' game at?"
Brian: "Sherry is a master at that... she kicks my butt every time!"
-5/9/06 (can you be a master at figuring out game-times? he saw I had a sudoku puzzle open on my desktop, so that's what Sherry's a master at!)

Sherry: "If you need more lunch, Brian can share a sandwich"
Ciara: "Brian's on the South Beach Diet?"
-6/22/06 (sigh. I really need to get my hearing checked!)

Aw. We were so tired! Anyways, good luck team DRAG (Drag Reduction Applications Group) and I hope you all have a greater sense of peace knowing more about how I make money. :)