Hello! Guess what? This is my 200th entry! Can you believe it? It's weird to think that this is the 200th time I've sat down to write one of these things... should I be getting a life? :)

Anyway, in light of all of the (199) random stories I've told you over the years, I decided to share with you the story of one of my favorite new Saturday Night Live skits. And it'll also reveal a suggestion for dealing with me when my stories aren't... quite... up to my entertainment-standard. :)

Let me introduce you to (the fake) "MTV 4's Deep House Dish", the "only show devoted entirely to house music and the latest house music stars", with DJ Dynasty Handbag and his best girl friend and co-host Tiara Zee: 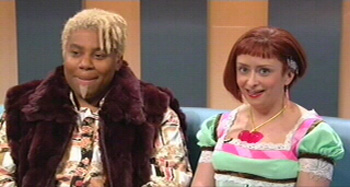 Now, word on the street is that this SNL skit isn't the funniest, but I actually find it beyond hilarious, mostly because Tiara (hmmm... which sounds a lot like "Ciara") tells the most boring and pointless stories ever. As someone who tells many stories (you're reading one right now!), I can relate to some of them... well... bombing. :)

DJ Dynasty: That's it? Ooh-wee, Tiara, I am telling you this as a friend, that story was both bulky and boring, okay?

DJ Dynasty: Ooh-wee Tiara! Out of concern for you and how you are perceived by other peoples, I want you to understand how bored we all just got, ooo-kay?

DJ Dynasty: OOH-WEE, TIARA! What on earth happened in your childhood that made you this uninteresting?

DJ Dynasty: OOH-WEE, Tiara! I have such low expectations and yet you still disappernt. Okay?

Man, it's so easy for me to put myself in Tiara's shoes and imagine DJ Dynasty's reactions being directed at me! Here are some other examples of their conversations:

DJ Dynasty: Tiara's going to give us a review of Madonna's new dance mix. Hey Tiara.
Tiara: Hey.
DJ Dynasty: Tiara, tell me, what did you think of Madge's new moves?
Tiara: Um, it's okay.
DJ Dynasty: That's it? That's your review? Tiara, why are you so dull? I mean you need to work on that okay?
Tiara: Okay.

[After the singer "Tres Latraj" left halfway through her interview]
DJ Dynasty: Oh, oh! That was rude the way she just jumped up and ran out of here, right?
Tiara: That was.
DJ Dynasty: Tiara, please be less boring very soon, okay? I mean it's not good for your health, alright?

[After "Ms. Drama Martinez" performed her new hit single "At The Club"]
DJ Dynasty: Girl, where did you come up with those lyrics?
Ms. Drama Martinez: Those are not just lyrics, those things are things that really happened to me; they're real.
DJ Dynasty: You mean to tell me that you ate two bad fish sandwiches, had a root canal, and lead poisoning all in one week?
Ms. Drama Martinez: Actually, I had a third fish sandwich, but I didn't mention that one because I thought people would think I was a moron.
DJ Dynasty: Well, you must love fish sandwiches.
Tiara: I can't have fish.
DJ Dynasty: Ooh-wee! Tiara, I am telling you as a friend, make sure when you move your lips, something interesting comes out, or else people are going to think there's something wrong with your brain, okay?

[After "DJ Frontal Assault" and "DJ Dimitrios" perform their single, "Urgent Needs (Jake Gyllenhaal)"]
DJ Dynasty: Oh my goodness! �You know, I'm going to immediately download that onto my iPod.
Tiara: You guys really brought it.
DJ Dynasty: Ooh-wee, TIARA! You are TEDIOUS!

DJ Dynasty: What�s going to be the hot thing in the club to wear this year Tiara?
Tiara: Ok, so I talked to people; and it looks like at the club, we�ll be seeing clubwear.
DJ Dynasty: That�s it? Ooh-wee Tiara, do you realize how boring that was? I'm concerned for you.
Tiara: (giggles) I know.

[After "Kayleesha Kang" performed "Don't Google Your Man"]
DJ Dynasty: Kayleesha Kang! Girl, your career is on fire! If I were to google you what would I find? I mean, give us some concert dates.
Kayleesha Kang: Well, on March 1st, I�m gonna be singing at the Paul Sebastian hair show early in the morning. And then in the afternoon, I�m gonna open in the George Takai gay-lesbian center in Hot-lanta. And then later that evening, I�m gonna be singing at a hepatitis benefit, and then the rest of the month I�m gonna be running errands.
Tiara: I hate errands, I�ll tell you that right now.
DJ Dynasty: Ooh-wee Tiara. Now I�m only saying this in your best interest; but how on EARTH do you manage to be so dull, okay?

[While interviewing "DJ Intro"]
Tiara: I have a question for DJ Intro.
DJ Dynasty: Well go on ahead, baby girl, go on ahead.
Tiara: ...I forgot.
DJ Dynasty: Ooh-wee! TIARA! Do you just realize you bored a whole bunch of people?! I mean you are like human ambience! Ooh-kay?

Wow, brilliance! Who can't relate to that? And just to give you an idea of how appropriate this SNL skit is to my life, let me recount for you a conversation that happened at my apartment a couple of weeks ago:

(My roommates and I were watching a show on the Discovery Channel)
Demoree: "It's so crazy that archeologists can find artifacts from thousands of years ago"
Ciara: "My mom lost an earring once and I found it in the driveway"
Demoree: "Ooh-wee, Ciara! What happened in your childhood to make you this boring?" 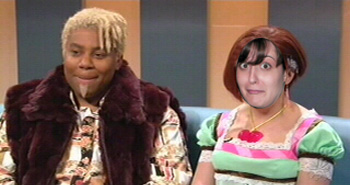 In my defense, the story was a lot more interesting than that; I just was tired and it took too much effort to explain the whole thing! I guess I could have either told the whole story (that it was a pure gold earring that I found almost a year after she lost it) or not brought it up, but you know how that hindsight is!

Anyway, feel free to memorize DJ Dynasty's responses and bring them out when a story of mine fails to keep your interest. Although, I am pretty nervous about the potential guestbook entries after this! Oh, and I hope that your knowing me and my ridiculous stories help you appreciate that skit, too. :)